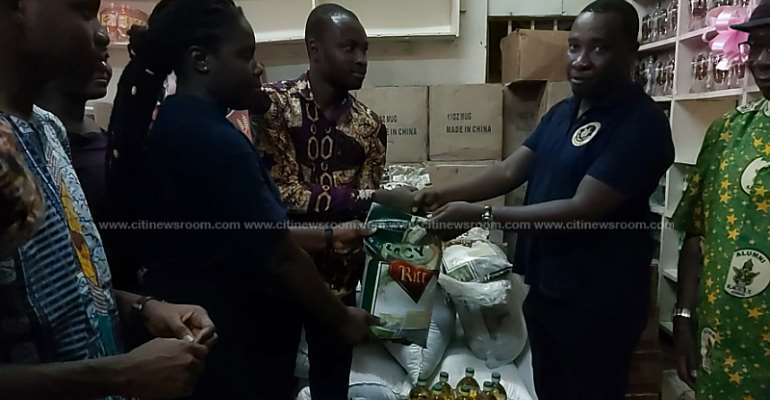 The Global Alumni of the Kwame Nkrumah University of Science and Technology (KNUST) has joined the calls asking Ghanaians to consume local rice.

According to the group, this will help avoid the situation where rice farmers in various parts of the country do not get easy access to market.

They believe the increase in patronage will help create jobs for Ghanaians who are interested in venturing into rice farming.

With the recent campaign on the consumption of local rice fast gaining support from a cross-section of Ghanaians, the Association said they decided to add their voice when an idea on donating food items to the KNUST food bank came up.

According to the Global President of the KNUST Alumni, Dr. Kwaku Agbesi, they had observed that some students at KNUST struggled to get three square meals and as a result, they decided to support the food bank which primarily gives free food to needy students in the university in order to feed more students.

He said they then decided to donate local rice produced by an alumnus of the university.

Speaking to Citi News, the leadership of the Association called on Ghanaians to patronize local rice to help boost the economy.

“About two years ago, we came to the college of engineering and there was this lady who for 24 hours had not had anything to eat. It was within the examination week. We said we needed to do something about it. So somewhere in September, we met the SRC Executives in Akuse and they told us of this initiative that they were embarking on (KNUST Food Bank). We felt this is something we need to associate ourselves with. I think it is our singular duty to make this initiative sustainable. If we cannot do anything for our students, this initiative, we need to pursue it further.

We heard in the news that some rice farmers in the Northern region were not getting market for their produce. Citi News, in particular, embarked on this promotion of made- in- Ghana goods. With that, we also said as Technocrats, we are supposed to lead the forefront of making simple technology available, making sure that we consume what we produce and we said when we are coming to support this good initiative, then the only thing we can do to support Citi FM and other media houses that have embarked on this promotion of made in Ghana goods is to purchase a locally made rice”.

The KNUST food bank is an initiative of the Students' Representative Council of the Women's Commission of KNUST.

The Women's Commissioner, Esinam Sosu-Dees says her outfit has so far been able to support over 600 needy students out of about 1500 applications they received. According to her, they have begun the first batch of the distribution and are seeking to provide food items for all students who have applied.

“We launched the Food Bank on 14th October 2019. We were actually looking forward to feeding about 500 people but when we sent out applications for people to apply, we had over 1000 people applying. Right now, it should be totaling 1500. So far, we've given out food items to 600 people”.

Esinam is calling on philanthropists, associations, and members of the general public to support the KNUST Food Bank in order to support more needy students in the University.

She says the University's counseling unit and the office of the Dean of Students have been involved in the scrutiny to help ensure deserving students are supported.