In US, Sudan PM sees progress on terror list removal 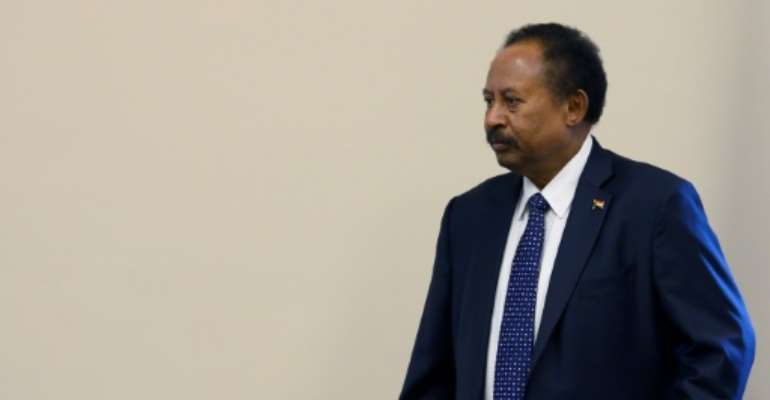 Sudanese Prime Minister Abdalla Hamdok holds talks at the US Capitol in a landmark visit to Washington. By JIM WATSON (AFP)

Sudan's new civilian prime minister said Thursday he saw progress on removing his nation from a US blacklist of state sponsors of terrorism as he paid a landmark visit to Washington.

Prime Minister Abdalla Hamdok, who has embarked on ambitious reforms and peace initiatives since his transitional government took over in August after decades of military rule, is the first leader of Sudan to visit Washington since 1985.

The United States agreed Wednesday to restore full diplomatic relations after more than two decades but still classifies Sudan as a state sponsor of terrorism, a major impediment to would-be investors who fear repercussions in the world's largest economy.

"Over the last two to three days here in Washington, the elephant in the room is the issue of the delisting of Sudan from the state sponsors of terrorism," Hamdok said at the Atlantic Council, a think tank.

Hamdok, a British-educated former diplomat and UN official, said the blacklist had an impact not only on investment but on efforts to relieve Sudan's debt and to usher in a broader "opening" of the country.

He said the discussions were "progressing very well."

"We're making progress on this, and we hope we'll be able to reach a conclusion," he said.

US officials, while voicing support for Hamdok, say that removal from the list is a legal process that requires a formal review over a six-month period.

US lawmakers who met Hamdok said that Sudan must reach a settlement with families of the victims of the 1998 bombings of the US embassies in Kenya and Tanzania as well as of the USS Cole in 2000.

"When it comes to the claims, we are also, as a nation, victims of terrorism inflicted on us by the former regime. But we accepted this," Hamdok said of the lawmakers' demands.

The United States retaliated for the embassy attacks by destroying a major pharmaceutical factory in Sudan over allegations, fiercely disputed since, that it produced a nerve agent.

Bashir was toppled in April by the military, which itself gave way in the face of mass protests led by young people concerned about poor economic opportunities.