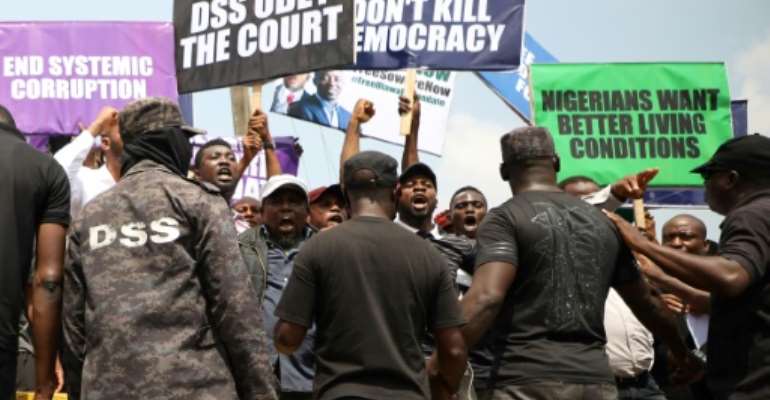 People demonstrate to demand the release of opposition activist Omoyele Sowore in November 2019 in Abuja. By Kola Sulaimon (AFP/File)

"Our clients have been released. They were released to a lawyer in our team," said their lawyer Femi Falana.

The pair were released hours after a judge gave the secret police 24 hours to release Sowore, who had been held since August by the Department of State Services (DSS) after urging protests under the online banner "#RevolutionNow".

In conjuction with his release the DSS "also paid a symbolic fine of 100,000 Nigerian naira ($276) for failing to obey an earlier judgement, the lawyer said.

In October, a high court in Abuja, the federal capital, ordered that Sowore and his co-defendant Olawale Bakare be released on conditional bail, but the authorities kept them locked up.

Sowore and Bakare were accused of "treasonable felony", "cyberstalking" the president and money laundering, among other charges.

Sowore, who runs news website Sahara Reporters which regularly reports on official graft, had called for nationwide protests against misrule in Nigeria.

A series of street protests have been held in Abuja calling for his release.