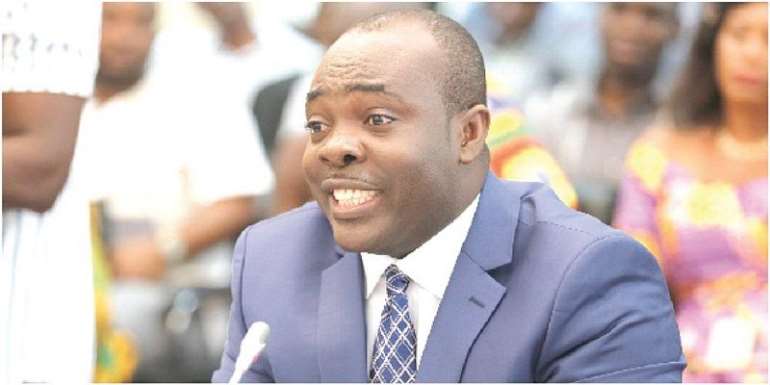 The Minister for Youth and Sport, Isaac Kwame Asiamah has revealed that, he was investigated by the National Security in relation to Australia Visa scandal.

He stated that, the decision by him to make himself available to be investigated by the National Security was to enable Ghanaians to really know he was not involved in the said scandal as being speculated.

Some officials of the Ministry for Youth and Sport came under intense seriously criticism and bashing when some Ghanaians were arrested in Australia as fake journalists during the Commonwealth Games Gold Coast Australia 2018.

The officials were accused of falsifying documents for some persons who were not journalists to cover the competition.

Speaking at the Meet the press series of the Information Ministry held in Accra, Mr Asiamah noted that,”The investigation was done to clear the air of people who have been accused wrongly for wrong doing in which i was investigated my self.”

He added that,” the committee did a good job and has vindicated all those who were accused falsely and they have been called back to their duty again.”

The Atwima Mponua legislature also boastfully claimed that the Ghana Football industry is born again especially with the new crop of leadership as he urged the new GFA president to put in more effort and bring back the love for football as he assured him of government’s full support.

Background
The 2018 Commonwealth Games were held from 4-15 April, 2018. In the wake of the games, the Australian authorities revoked the visas of many Ghanaians who had gone to the games allegedly posing as journalists.

Reports indicated that more than 70 people who had claimed to be journalists were deported for bearing false identities and failing to convince the Australian officials that they were, indeed, journalists.

he eight people allegedly travelled to Australia by posing as journalists to cover the 2018 Commonwealth Games held in Gold Coast, Australia. They were deported by the Australian authorities after it was established that they were “fake journalists”. They were part of a group of 12 Ghanaians who were repatriated from Australia during the games.

The CID investigative report showed the various means through which the deportees, who included a farmer, a carpenter and a spare parts dealer, obtained travelling documents and went to Australia by posing as journalists.