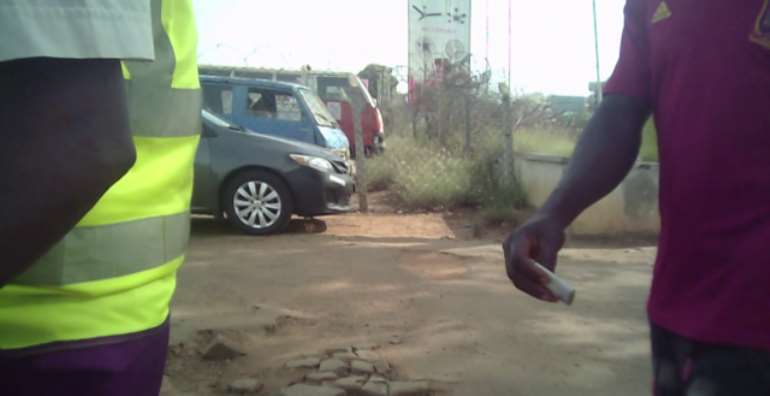 Some members of the Accra Metropolitan Assembly's (AMA) City Guard, popularly called Abayee, have been caught in a secret video demanding and taking money from shoppers around the Makola Shopping Mall and Kinbu School, Accra to set them free without taking them through due process.

At Makola Shopping Mall
The men who were part of some City Guards sent to decongest the Accra business centre by clearing traders and hawkers from the streets and pavements and other unauthorised places, accosted a lady shopper who had littered the street with a water sachet and brazenly and illegally imposed an instant “fine.” Without mincing words, the guards asked the woman to pay them some amount of money or be taken to the authority to face due process.

The City Guards turned death ears to the pleading of the woman who offered a much smaller amount claiming she had just finished shopping with all her money and insisted on “their pound of flesh.”

After some time of pleading without the City Guards budging, a hawker came to the poor woman’s rescue by giving her some money to make up the shortfall, thus enabling her to meet the demand of her “captors” who took the money and allowed her to go. The woman, who had picked the water sachet and was holding all through the standoff, put it in her purse and left.

At Kinbu
In a similar development, another male shopper was also accosted by other City Guards around Tudu and Kinbu School area for littering the pavement with a water sachet. After some time of pleading by the shopper and sympathetic passers-by, the City Guards hauled the sanitation offender into their operation vehicle and drove him to their offices.

The relatives of the arrested shopper later went to speak with one of the City Guards’ bosses who asked one of his subordinates to take them aside and sort things out. Sure enough, after the sorting out – whatever that meant - the offender was eventually released.

One of the City Guards fearing that their activities might have been under scrutiny approached Tiger who had been sitting close to them and asked her to leave the place, it was out of bounce to non-city guards.

The Launch of the AMA Sanitation Metro Guards and Their Responsibilities

It would be recalled that the Accra Metropolitan Assembly (AMA), in April 2018, launched the Sanitation Metro Guards to operationalised its threat to arrest and prosecute persons accosted littering the streets and/or dumping refuse at unauthorised places.

Mohammed Adjei Sowah, the Chief Executive Officer of the Accra Metropolitan Assembly (AMA), at the ceremony, emphasised that no one will be spared when they fall foul of the law adding that it is time to enforce the bye-laws of the Assembly as the Assembly had done enough to educate the citizens to keep their surroundings clean but with very little response from the people.

The AMA Mayor added that “Our enforcement drive has no colour; it does not entertain excuses. We are enforcing the law to the latter. We have realised that education is not enough, the problem out there is attitudinal. So we will apply enforcement. It is utterly unacceptable for someone to tell me that because there are no bins positioned on the pedestrian walkways they have a right to dump their litter anyway.”

“We will ensure that people who litter the streets are picked up and taken to the nearest police station for prosecution. People who dump indiscriminately will be picked up and taken to the police station. People who sell by the roadside without refuse bin and litter where they trade, we are sending a word of caution, which they should get litter bins otherwise we will prosecute you”, he added.

Without mincing words, the AMA mayor posited, “we are not just sending ordinary men to go and do the enforcement. We are sending people who have the capacity, have been equipped and know the law to go and do the implementation. We want to do this work every day, and we are doing it day and night because those who sell day and night, as well as those who push carts at night, will all be prosecuted.”

"Your operation should be unbiased. We want to make sure that you achieve”, he cautioned.

One wonders if the city guards have been sufficiently schooled on this new resolve and policy to combat civic indiscipline and sanitise the commercial districts of Accra.

When the Mayor made these pronouncements, he thought he was doing the citizens a lot of good but was unknowingly empowering these City Guards to extort money from the poor hawkers.

When some hawkers at the Tudu traffic lights were asked of the activities of the city guards tasked to sanitise the city of filth, a hawker by name Nana Kwame bitterly complained of the activities of the Abayee in relation to sanitation. According to Nana Kwame, the Guards responsible for ensuring the city is clean and devoid littering go around hunting for people who litter the streets and take money from the offenders. He also said that the guards while going about their duties take money from street hawkers who are visibly seen displaying and selling their goods around litter bins stationed at vantage points for shoppers to drop their waste thereby preventing people from noticing the bins and dropping their waste into them.

He then called upon Mohammed Adjei Sowah, the Chief Executive Officer of the Accra Metropolitan Assembly (AMA), to critically supervise the activities of his recruits (Abayee) or take them out of the streets as their activities might sooner than later result in a fierce clash between the citizens and his City Guards.