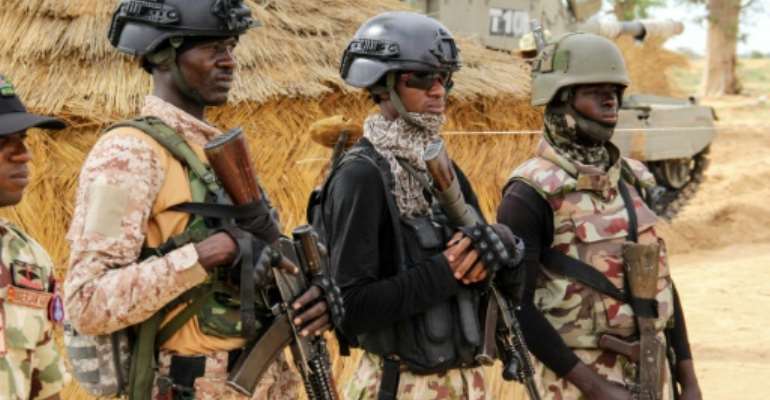 Nigerian army has been fighting against an Islamist insurgency in northern Nigeria for a decade. By AUDU MARTE (AFP)

"Terrorists from ISWAP set up a roadblock on a road between Maiduguri and Damaturu yesterday... and took 14 people," said one security source said.

"Among the kidnap victims are an army sergeant and his family and two Red Cross staff who were also taken."

A second security source confirmed the kidnapping of the soldier and the Red Cross workers.

The two are the latest aid workers snatched by militants in northern Nigeria, where the army has been fighting a Boko Haram jihadist insurgency for a decade.

ISWAP is a Boko Haram splinter faction that swore allegiance to Islamic State in 2016. It has carried out numerous attacks on civilians.

ISWAP claimed in a statement, which AFP was not immediately able to verify, that six Nigerian soldiers and eight civilians, including two Red Cross workers, were among those kidnapped.

A representative of the International Committee of the Red Cross (ICRC) Nigeria, contacted by telephone, said the organisation was not able to confirm whether they were employees of the local Red Cross or the ICRC.

They were still making checks on Thursday.

Six Nigerian aid workers -- one woman and five men -- were seized in July by ISWAP jihadists during an ambush on their convoy close to the border with Niger.

Action Against Hunger (ACF) charity said in September that militants had killed one of the six. But the group did not identify the victim.

ISWAP had previously released a video following the abduction of the female ACF staff member in which she pleads for the release of the hostages with her, five male colleagues behind her.

The decade-long insurgency in Nigeria has killed 35,000 people and displaced about two million from their homes in northeast of the country.