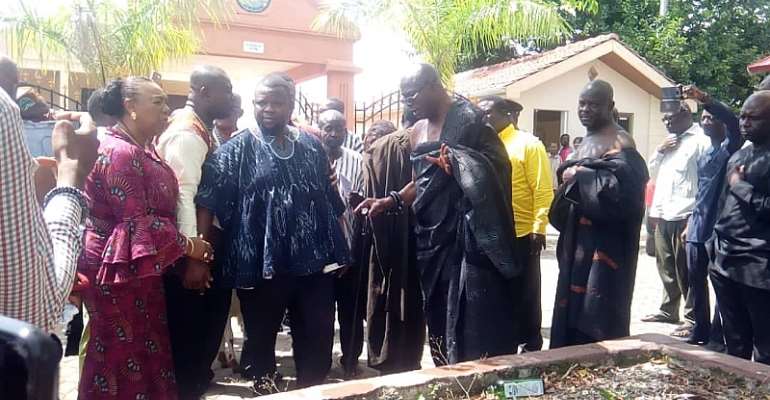 A delegation from the National Democratic Congress (NDC) led by Chairman Samuel Ofosu Ampofo visited the Akyem Abuakwa Traditional Area of the Eastern Region to apologize to the Okyenhene, Osagyefo Amoatia Ofori Panin on behalf of its Ashanti Regional Secretary Kwame Zu.

The Delegation from the NDC was led by the National Chairman Mr Ofosu Ampofo together with Mr. Victor Smith, Betty Mould and other high ranks of the party to apologize on behalf of the NDC Ashanti Regional Secretary Mr. Kwame Zu for the comments he made against the Okyehen Osagyefo Amoatia Ofori Panin.

Kwame Zu months ago said that the people of Kyebi competed with animals until former President John Mahama provided water for its residents, despite the town being the hometown of President Addo Dankwa Akufo-Addo.

But the party hierarchy was at the Kyebi this morning to have a closed-door meeting to apologize and settle differences between the two parties.

The Ashanti Regional Secretary of the NDC was quoted by Kingdomfmonline.com saying the Okyehene use to drink water with animals.”