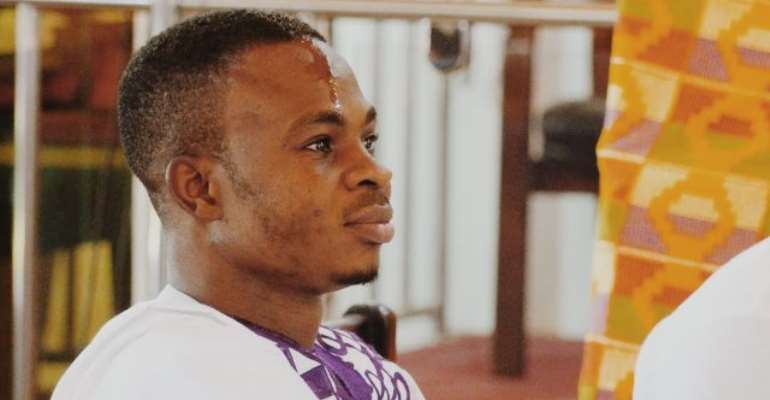 The book titled 'Not Rejection but Direction' is written by Gerald Amenyo, an inmate of Nsawam Medium Security Prison serving 20 years for Robbery

Gerald Amenyo is focused, as though he’s in a trance sitting at the high table; absorbed by his surroundings that make up the solemn atmosphere of the church auditorium at the Ghana Prisons Service Headquarters.

He is short in stature and could easily get lost in a crowd.

But on the day of the launch of his book, Not Rejection but Direction, he stood out and wore the inmate badge of honour proudly.

The book which has been dubbed historic is the first faith-based book to be written in prison by someone who is yet to complete a major part of their sentence.

Gerald catalogues episodes of the typical prisoner lifestyle in his perspective, from arrival to the latest years he has so far spent in Nsawam Medium Security Prison. The chapters take you on an unrestrained emotional journey through all his stages of managing life in prison.

The inspiration for the book and its title come from the times he felt rejected by his family when he felt alone in confinement and just when he was about to give up on life, he reveals.

Life in prison he says has been tough.
“I was convicted at a prison in Ho, in the Volta Region and after my conviction I was brought to Nsawam Medium Security Prison and that is so far from my family,” he says.

“I’ve not been seeing or hearing from my family. There is no visiting.”

But listening to the repetitive one lyric of an original song ministered by the Nsawam prison choir, ‘If I didn’t go to prison, I wouldn’t know God will use me,’ makes me believe otherwise.

Gerald commands himself like a king. Some could say he is indeed a living testimony of not succumbing to the perils and troubles of life in this world.

Coming from a poor family, he took the hustler’s route to solving life’s problems that afflicted him and his family. He admits that some calamitous decisions led him to prison though while in prison, he found hope in the Lord.

With the awful times behind him, and 11 years left to go, he says the Lord has directed him to use his story to inspire his fellow brothers and sisters in and out of prison.

Ropheka Foundation, an NGO which works with orphans, the aged and prisoners providing them with life essentials to keep up with basic needs including healthcare, met Gerald on a visit to Nsawam Prison and has since worked together and helped him produce the book.

The Chief Executive Officer of the NGO, Dr Mary Osei is forever proud of Gerald’s achievement.

“He has transformed his life,” she says, declaring his testimony.

She says as a result of Gerald’s book, inmates are acting on good behaviour in hopes that they too can get an opportunity like Gerald.

Gerald shares that, to write the book though, he had to use a torchlight to jot down thoughts at night because during the day it was too busy to pen down anything and at night, there is no electricity.

The first copy of the book was auctioned at GH¢2,000

Superintendent Courage Atsem who is the Chief Public Relations Officer of the Ghana Prison Service, also praised Gerald for persevering through to produce his story in long-form.

He believes that Gerald is the personification of a lot of ‘precious souls’ as Gerald puts it himself, in the prisons who have talents abounding and ask hand in hand with Dr Osei and Gerald, for government, other NGOs to look at some of the prisoners and give them a second chance whether in prison or upon release.

He also believes Gerald is a role model for his fellow inmates.

Gerald’s story will inspire you. A copy of the book is going for GH¢30 and can be bought from Ropheka Foundation.