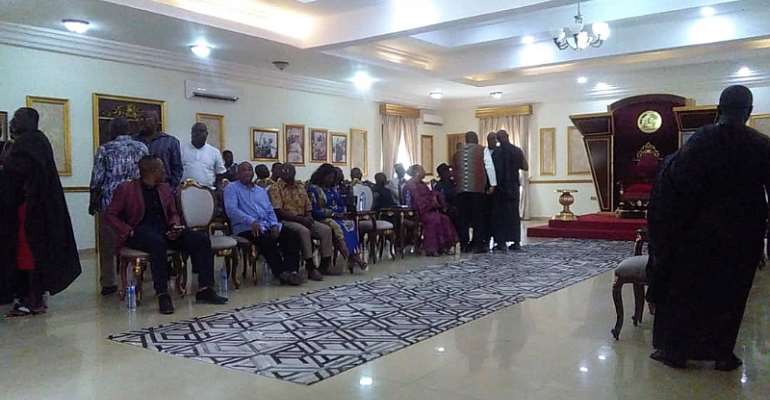 Traditional leaders in Akyem on September 23 led a demonstration to register their displeasure over what they described as unsavoury statements made by Kwame Zu and went on to pronounce a ban on the NDC from entering any palace in the Akyem area.

They also demanded an apology and a ritual pacification.

Kwame Zu reportedly said that until the intervention of then-President John Mahama, the Okyenhene had to resort to sharing drinking water with animals.

Representatives of the NDC, led by its national chairman Ofosu Ampofo, Kwame Zu and other executives from the Ashanti and Eastern Regional branches today, Thursday went through necessary rites which included the pouring of libation and slaughtering of a sheep which forms part of the ritual pacification.

The Osagyefo Amoatia Ofori Panin and the traditional authorities, who were satisfied with the apology, rescinded an earlier request by the Chiefs for Kwame Zu to provide 98 sheep’s and also lifted the ban placed on the party.

Okyehene spoke through his linguist, Osagyefo Kyame Kwadwo Antwi-Boasiako and told Kwame Zu to go and sin no more.

The Chairman of the NDC Ofosu Ampofo who was delighted thanked Okyehene and the Chiefs and promised to strengthen the relationship between the traditional authority and the party.

Speaking to Citi News, later on, Mr. Ofosu Ampofo said the NDC only wanted to make sure peace prevailed.

“Even though he [Kwame Zu] did not speak on our platform, we felt that as our Regional Secretary, the right thing was for us to respect tradition. So we have gone through the right traditional practices.”