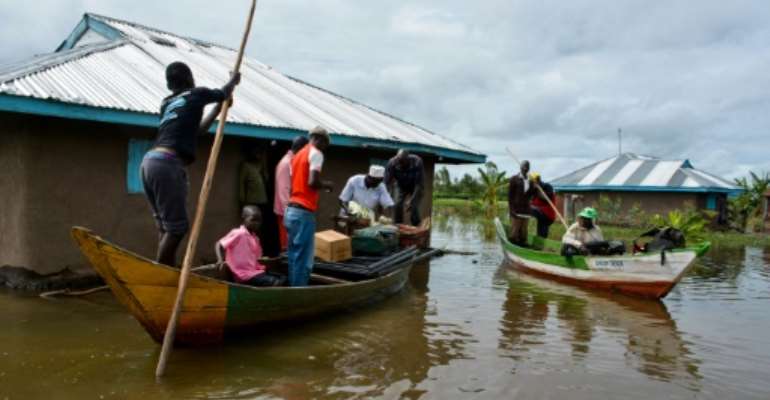 Rescue boats evacuate families after their houses were flooded in Kenya. By CASMIR ODUOR (AFP)

Two months of relentless rains have submergedvillages and farms and sent rivers of mud crashing into houses across East Africa, with at least 265 killed, according to an AFP tally, as meteorologists warn of more to come.

The extreme downpours have affected close to two million people and washed away tens of thousands of livestock in Kenya, Somalia, Burundi, Tanzania, South Sudan, Uganda, Djibouti and Ethiopia.

With a tropical storm headed for Somalia and more rain forecast across the region in the coming weeks, fears are rising over waterborne diseases and the prospect of hunger as crops are destroyed.

In Burundi, 38 people died on Wednesday night after heavy rains triggered landslides that swept through hillside communities in the northwest of the country, according to a provisional police toll on Thursday.

"It happened in the night, when everyone was at home, and landslides hit three very steep hills and buried everything in their path," a witness told AFP.

"Whole families were buried alive in their homes or in the fields. It was terrifying."

Kenya has been hard hit with 132 killed and 17,000 displaced, schools, roads, and health centres flooded, and water systems clogged across the country, government spokesman Cyrus Oguna said in a statement on Tuesday.

The "weather forecast has indicated that the current rains are not expected to cease until the end of December 2019," the statement said.

In South Sudan, the UN refugee agency UNHCR said nearly a million people have been affected by floodwaters which submerged whole towns, compounding an already dire humanitarian situation after six years of war.

Flooding has also affected 570,000 people in Somalia, according to the UN Office for the Coordination of Humanitarian Affairs (OCHA).

The European humanitarian agency ECHO meanwhile warned of a tropical storm due to hit northeastern Somalia on Friday, bringing the threat of more flash floods.

In Tanzania, 55 people have died, according to an AFP tally of police figures, including 30 in flash floods in the northeast in October, 15 whose car was swept away by floodwaters in the town of Tanga, and 10 who drowned last month in northern Mwanza.

In Uganda, eight people have died and over 80,000 have been displaced by flooding and mudslides this week, Disaster Preparedness Minister Musa Ecweru said in a statement.

In Sironko district, also on Mount Elgon, "two adults and two children were killed" and over 4,000 people affected.

"The risk of more flooding and landslides is real," the minister warned. 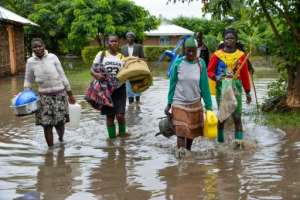 Ethiopia has also been affected,with 22 people dying in a landslidein the south of the country in October.

Djibouti has also experienced unusually heavy rains, with a joint government and United Nations press statement reporting that some areas received "the equivalent of 2 years of rainfall occurred in one day" in heavy downpours two weeks ago.

"Some 10 people (7 children) have reportedly been killed," said the statement, adding that 250,000 were affected countrywide.

The extreme weather is blamed on the Indian Ocean Dipole -- a climate system defined by the difference in sea surface temperature between the western and eastern areas of the ocean.

At the moment, the ocean around East Africa is far warmer than usual, resulting in higher evaporation and moist air flowing inwards over the continent as rain: the hallmarks of a "positive" dipole.

Scientists say the strength of this dipole is of a magnitude not seen in years, perhaps even decades.

These waters around East Africa have been about two degrees warmer than those of the eastern Indian Ocean near Australia -- an imbalance well beyond the norm.

The heavy rains have also wrought destruction in central Africa, with scores killed in the Democratic Republic of Congo, including 41 in the capital Kinshasa last week.

In the Central African Republic, OCHA says around 100,000 people have been displaced.