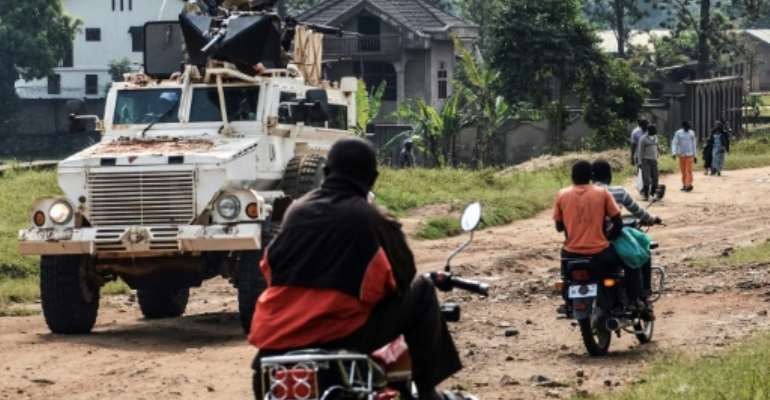 Attacks by the ADF militia have sparked protests over the UN presence in DR Congo. By Alain WANDIMOYI (AFP)

At least 14 people have been killed since Monday in eastern DR Congo in attacks blamed on a militia responsible for a series of massacres, local officials said.

Dozens of armed groups have troubled the DR Congo's restive east for decades despite a UN peacekeeping presence, but recent attacks have been blamed on the Allied Democratic Forces (ADF) Islamist-rooted militia.

"Three people were killed in the night between Wednesday and Thursday in Oicha," Beni region administrator Donat Kibwana told AFP.

The official blamed the ADF for the attack.

The overnight attack followed a massacre on Monday of another 11 people in Orototo near the Uganda border, the Lucha civil society group said.

More than 100 people have been killed in attacks blamed on the ADF since November 5.

DR Congo forces launched operations against the ADF in the eastern region at the end of October. But in response the ADF has carried out massacres, in an apparent bid to discourage civilians from helping the military.

On Monday, the Congolese army said it had "neutralised" 80 ADF fighters, including four of its six main commanders.

Mounting anger over militia violence has sparked demonstrations in the eastern city of Beni, where local people accuse the UN peacekeeping force MONUSCO of failing to protect them.

MONUSCO has said it will carry out joint operations with the Congolese army to crackdown on the ADF.

But it has struggled to make progress in a vast country beset by armed groups as well as an Ebola epidemic, poverty and poor governance.