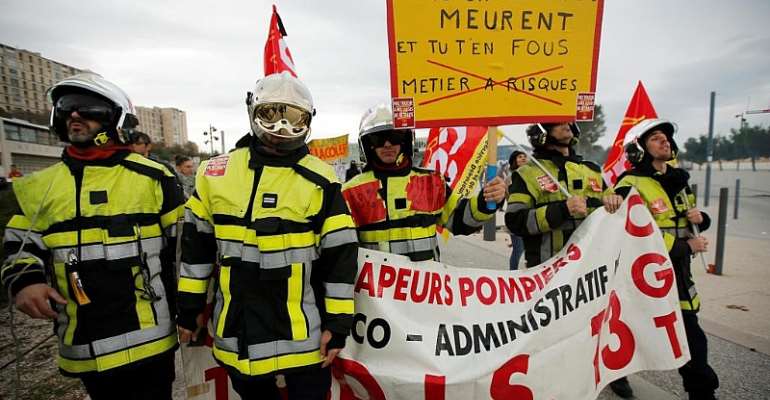 French public sector workers began a nationwide strike on Thursday over Emmanuel Macron's plans to reform France's generous pension system, in the biggest challenge to the president since “yellow vest” protests erupted last year. Here are four reasons many French people are taking to the steets:

1. Macron's pensions reforms
Macron wants to set up a single points-based pension system in which each day worked earns points for a worker's future pension benefits.

That would mark a big break from the existing set-up with 42 different sector-specific pension schemes, each with different levels of contributions and benefits. Currently pension benefits are based on a worker's 25 highest earning years in the private sector and the last six months in the public sector.

3. Trade Union's reactions
Public sector unions are concerned that their workers will come out worse because under the current system the state makes up for the chronic shortfall between contributions and payouts in the sector. Unions also worry they will lose their say on contributions and benefits under a centrally managed points-based system.

4. Possible compromises?
Prime Minister Edouard Philippe has indicated concessions could be made on when the reform takes effect. He said he favors a compromise between “an immediate and brutal transition” that would make the reforms applicable to people born after 1963, and a “grandfathering” clause that would impact only people entering the labor market from 2025. But Philippe says the government will not back down on creating a points-based system, one of Macron's core election promises.

Vetting: Some NDC MPs were compromised; it was a shameful, p...
4 minutes ago