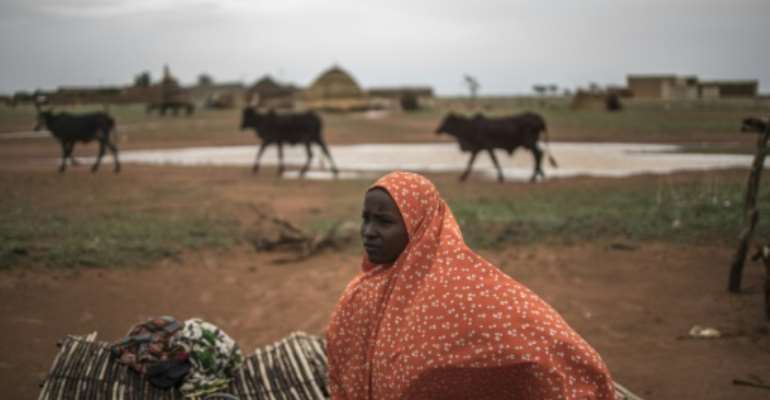 The long trail: Safira, a nomadic herder, sits on a straw mat outside her family hut in a Fulani camp in Dosso. By Marco LONGARI (AFP)

It was noon and 45 degrees Celsius (113 degrees Fahrenheit) on the ninth day of their quest to reach new pastures.

There was no tree anywhere, no shelter at all for his family, 27 sheep and six camels.

"We heard that the first rain has fallen in the north. That's where we're going," the turbaned herder said, as he filled up a water bottle at the side of the road.

An arduous trail lay ahead: more than 100 kilometres (60 miles) across the arid wastes of southern Niger before the family reached their goal. 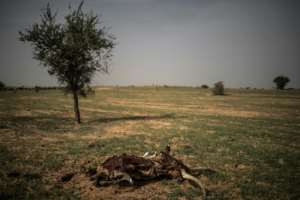 The carcass of a cow lies on the trail leading to Bermo. By Marco LONGARI (AFP)

There at Bermo, they counted on joining thousands of other herders, spending a few months in verdant hollows on the edge of the Sahara, famous for their moist air, juicy grass and water.

The annual migration of the nomadic Fulani community -- also called Peuls -- is a vast caravan of herder folk that tails back to neighbouring Nigeria.

Women and children perched on donkeys already overburdened with bags of jute, plastic containers, mattresses and gourdes. Scrawny cows, sheep and goats trailed alongside in the baking heat, looking exhausted.

Nomadic herders are among the world's most exposed communities when it comes to the impact of climate change.

Higher temperatures, shifting winds and moisture levels that alter rainfall patterns, sandstorms, torrential rain -- all can change the quality or even the location of pasture on which migrating herders depend.

This year, for the Fulani, has been relatively good. 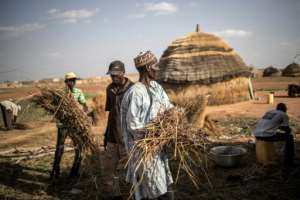 Men rebuild a hut at a camp in Dosso. The nomadic lifestyle is highly vulnerable to climate change, especially altered rainfall patterns. By Marco LONGARI (AFP)

The herdsmen were able to draw on stocks of animal feed to help them survive stress points, while timely rainfall on some areas of the migration trail helped tender young grass to grow.

But whether this respite endures is the big question.

Niger, one of the world's poorest countries, depends on farming, particularly herding, to provide a livelihood for 80 percent of its population.

In addition to its vulnerability to climate change, the country is on the frontline of desertification -- the equivalent of around 150,000 football pitches is lost each year.

"The weather has become completely unpredictable," said Djafarou Amadou, an engineer working for a group called the Association to Revitalise Herding in Niger (AREN).

"What we fear most are pockets of drought which take people by surprise when they least expect it." 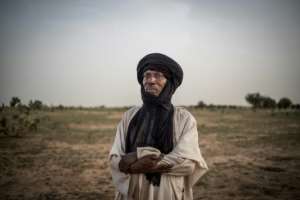 Rouada Sabgari, an elderly herder, wonders if his children will be able to carry on their ancient herding traditions. By Marco LONGARI (AFP)

But after a few weeks, the precious rain suddenly stopped. None fell for the next 30 days. The green plains turned yellow and the price of cereal fodder on local markets rocketed.

Rouada Sabgari, an elderly herder, said that he had to sell off his skinniest cows at rock-bottom prices just to survive -- a mere 5,000 CFA francs ($8.4, 7.6 euros) per animal, compared with more than 200,000 francs at better times.

Every winter, Sabgari said, he camps nearby a well dug by his grandfather more than half a century ago, six kilometres (four miles) from the village of Bermo.

He is part of a Fulani clan called the Wodaabe, famous for travelling extremely long distances with their herds, from Niger to the Central African Republic via Cameroon and Chad. 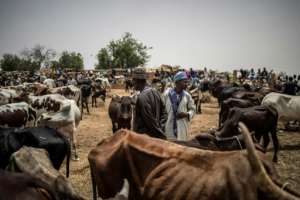 For sale: Fulani herders gather at the N'gonga cattle market near Dosso. By Marco LONGARI (AFP)

They are also nicknamed the Mbororo, like the hardy strain of reddish, large-horned steers they drive.

There is little that Sabgari doesn't know about survival and resilience.

But he said he wondered whether his children will be able to carry on the ancient herding traditions.

Successive droughts over the past 10 years have caused him to lose half of his herd.

Today, he only has 32 cows -- a catastrophic loss of capital for him and his 25-member family.

In the Fulani culture, cattle are the measure of wealth and freedom. According to their beliefs, at the making of the world, the cow was created by God (Gueno) himself, using a drop of milk.

Seated on a mat in front of his tent, on a plain swept by winds and plastic bags snared on thorny bushes, Sabgari looked back on a life of hardship and brutal change.

"In the old days, we didn't eat cereal or meat. The milk was rich and plentiful, it made us strong just by itself," he said. "It's impossible to do that today."

Sabgari said the worst droughts, in 1974 and 1984, were turning points for Sahel herders. They lost half of their cattle. 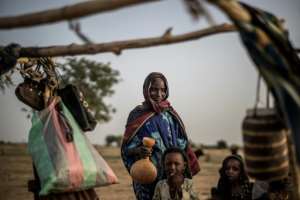 Even in good years such as 2019, the phantom of hunger has never gone away. By Marco LONGARI (AFP)

"We were unprepared for it," he recalled. "Everyone fled (south) to Nigeria. The animals were so thin and tired that we had to lift them to get them on their feet. Even the people were dying. There was nothing in markets."

Prayers to God to raise this "curse" and bring rain went in vain.

After the big droughts, smaller ones followed -- and food insecurity gradually became chronic, worsened by a jihadist insurgency and the displacement of the rural population it caused.

"Today, we have fewer animals and smaller harvests and more mouths to feed," said the engineer Amadou.

Niger is the sixth poorest country in the world but has the planet's highest fertility rate at more than seven children per woman on average.

Dwindling harvests, relentless population pressure, climate uncertainty, pollution of underground aquifers, rivalry between herders and farmers over access to land: all this is a deadly mixture.

In recent times, even in good years such as 2019, the phantom of hunger has never gone away.

Harvests and livestock production are in surplus and the price of millet, sorghum and corn has fallen. 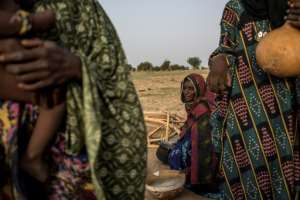 Women of the Wodaabe, one of the groups that make up the Fulani ethnicity, prepare breakfast. By Marco LONGARI (AFP)

Yet despite this, between June and August, 1.2 million Nigeriens were in a position of serious food insecurity, according to the UN's Food and Agriculture Organization (FAO).

Barka Azzey, 38, is a testimony to how herder families in Niger can be ground down by repeated crises.

His once-proud herd of 40 cows dwindled from hunger and diseases, leaving only scrawny beasts that gave no more milk and were unable to have calves.

It was time to quit.

"We didn't have enough to eat, to buy clothes, so I took my family and we went to live in the town," Azzey said, his voice betraying sadness.

He became a watchman, living with his wife Rabi and their five children in the grounds of a wealthy trader in Maradi, Niger's second largest town. 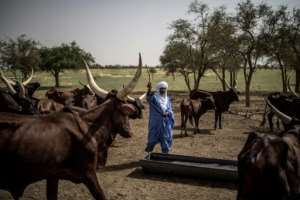 Every winter, herder Rouada Sabgari says that he camps nearby a well dug by his grandfather more than half a century ago. By Marco LONGARI (AFP)

On the floor of his hut, three thin chickens rested in the shadow of a satellite dish where clothes were stretched out to dry.

He is fixated by one idea -- "to earn enough money to rebuild my herd and get my old life back."

Azzey is just one of innumerable young Nigeriens who have turned their backs on the harsh life of herding to try their luck in the cities.

In cities across West Africa, you can see these young men hustling for a few bank notes, offering to shine your shoes, sell you a SIM card for your phone or some medicinal remedy.

Many become caught in the poverty spiral, and have no way out.

AREN, the British charity Oxfam and other NGOs have set up programmes in rural areas that seek to stem this human haemorrhage. 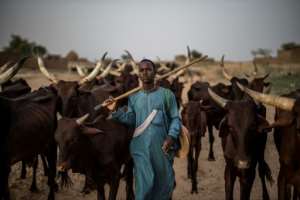 Greener pastures: A Fulani herdsman and his cattle in Bermo, a cool, moist haven on the nomads' trail. By Marco LONGARI (AFP)

One such scheme is a dairy, set up in the village of Bermo, which employs 300 people, mainly women, to produce yoghurt and cheese that are then sold at the local market.

Help such as this has been a boon to Hadiza Attahirou, 39, who for 15 years went to Mali or Senegal to work for a few months to earn a little money.

She received two cows under a help scheme -- a small income, but a lifeline.

"I can ease the burden for my husband when he goes off with the herds and pay my daughter's school fees," she said.

Others have benefited from micro-credit to buy farming tools or sewing machines.

The wheel of time turns, in the Fulani year, to Gerewol -- a grand festival to mark the end of the rainy season.

In Fulani folklore, this is a time to breathe and take into account life's blessings. Food is plentiful and the flanks of the animals are fat.

Nomadic clans arrive in Bermo from across the Sahel. Bonds of friendship and love are renewed. Weddings and births are celebrated. 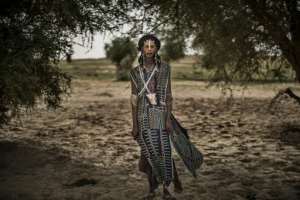 Time for celebrations: Ousman, a man from the Wodaabe group of the Fulani, poses in traditional attire in Bermo. By Marco LONGARI (AFP)

The ageless rituals of courting are renewed once more, as men -- their faces painted, their hair in locks and bodies decorated with magical charms -- dance for the women.

Like their animals who have grown fat on the grass of Bermo, the Fulani will also stock up on this moment.

Tomorrow, they will set out once more on the trail.

They will draw on memories of these days of comradeship, love and fun -- a precious fund to sustain them in the perils that lie ahead.

Before them lies furnace-like heat. Grass that will unexpectedly wither and die. Water holes that become parched.

And they will be doomed to walk further and further, in search of those elusive clouds.