Wild Przewalski horses: a journey from France to Mongolia 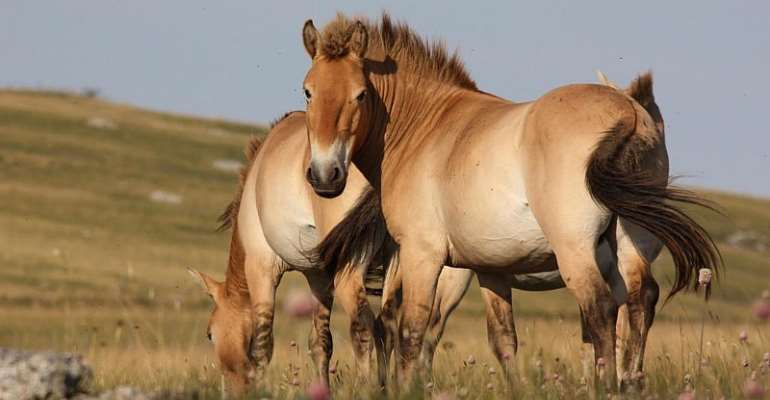 A small wildlife conservation association in southern France has been working relentlessly for the past 30 years to bring the wild Przewalski horses back to their natural habitat on the steppes of Mongolia.

Twenty-nine Przewalski horses, or Takhi as they are known in Mongolia, roam freely on 400 hectares of fenced land on the desolate Causse Méjean plateau in southern France. It is an isolated place where there is neither mobile coverage, nor internet access. It's over eight hours, by train and car, from Paris.

The horses are the fifth generation born in the area, which lies in the Lozère department and is part of the Cévennes National Park, in a region listed as a UNESCO World Heritage site.

The animals belong to an endangered species of horses from Mongolia, the Przewalski (Equus ferus przewalskii), named after 19th Russian explorer Colonel Nikolai Michailovich Przewalski, or Takhi as they have been known for centuries in Mongolia. Takhi means sacred in Mongolian and the first written accounts of the horses are from Tibetan monk Bodowa who lived around 900 AD.

The horses appear to have been around since prehistoric times and have never been domesticated. The International Union for the Conservation of Nature (IUCN) recognises the Przewalski as the only wild horse species in the world.

But in the 1960s, they ceased to exist in the wild and the only survivors were to be found in zoos across Europe.

French initiative to bring Takhi horses to the wild

In 1990, Swiss-born Claudia Feh, a wildlife biologist, founded the association TAKH with the aim of saving the Przewalski horses. In 1993, 11 of them were brought in from eight different European zoos to Le Villaret conservation site to allow them to slowly adopt a wild horse behaviour.

“We did not manage the horses. We gave them a huge enough space for them to behave like in the wild,” declares Laurent Tatin, the science and conservation programmes manager of TAKH.

It took over ten years for the Takhi horses in Le Villaret to be considered fit for reintroduction to the wild steppes of Mongolia.

In 2004, 12 horses were airlifted to the Seer reserve site in the western region of Khomyn Tal in Mongolia, followed by ten in 2005. Today, there are 89 Takhis in Seer.

“We decided to reintroduce the first horses after ten years, that is after two or three generations of horses born in Le Villaret, because they were capable of living on their own while demonstrating a stable social behaviour,” he explains.

Strong Mongolian/French partnership
The French NGO has been working closely with Khomyn Talyn Takhi (KTT) association, their Mongolian partner who looks after the reintroduction of the Takhi horses into their endemic habitat.

Munkhbat Tserendorj, executive director of KTT, says that the landscape and weather conditions of the Causse Méjean plateau is similar to that of the steppes of the Khomyn Tal region where the horses are reintroduced.

Temperatures on the 1,000m high Causse Méjean can drop down to -20°C, bringing snow which, Tserendorj says, is “important” for the horses' capacity to adapt to their Mongolian habitat.

“Mongolia is a country of extreme climate. In winter, we can reach -40°C. Here [at Le Villaret] is the best natural conditions for the horses before they are released into the wild,” Munkhbat Tserendorj declares.

According to him, once translocated in Mongolia, the horses from a semi-captive environment in Le Villaret adapt relatively quickly to their new environmental conditions before roaming in the wild, free from any human assistance.

Tserendorj believes that the success of the reintroduction in Mongolia is mainly due to the soft release approach they use.

“Reintroduction is done step by step. The soft release method we use involves less mortality, fewer risks, less trauma,” he explains. “We prepared additional food for the hard winter because the grass became very dry or covered by snow.”

“The amazing idea of Claudia Feh is not only to reintroduce individual horses in the wild but to also ensure that the relationships the horses built together here in France are preserved when they are transferred in Mongolia,” Tatin says.

He adds that TAKH's conservation project also stands out because of its strong scientific component.

“We have been monitoring the horses' behaviour, health and genetics since the very beginning of the project in 1993. It means that we really know each individual horse of our herd in France and as well as the ones in Mongolia,” he declares.

The NGO based in Le Villaret hamlet – and housed in one of the 18th century stone houses – attracts researchers and students worldwide as they regard the project in the Cévennes as “a bit like a lab”.

Co-existence with local communities
TAKH managed to overcome some challenges when it decided to bring Przewalski horses to southern France, 30 years ago. One of them was to be accepted by the people living in Hures-La-Parade commune as the association was “not bringing sheep but wild horses”.

For Tserendorj, conservation efforts cannot succeed without a strong collaboration with the local communities.

KTT and TAKH work with the semi-nomadic herders living on the Seer reserve to help them build sustainable herding activities that will not threaten the Takhi horses or their habitat.

Camels, which do not represent a threat to the Przewalski horses, are thus raised for their milk, meat and wool. The wool is homespun by members of the Women's Community Council of Khomyn Tal. It is also sold to a high-end French company manufacturing shawls and blankets which released its Khomyn Tal collection this year.

It is also important, Tserendorj adds, to educate the nomadic herders about the risks of hybridisation and ensure they keep their animals under control during breeding season.

The 14,000 hectares enclosed Seer reserve site will soon be part of the new Khomyn Tal National Park, a vast space of 410,000 hectares (a surface area of 2,500 sq km, larger than Mauritius island) which will have no fences.

“Our goal is to have a free roaming population of Przewalski horses with minimum human intervention,” Tserendorj says.

According to him, the new park and its 410,000 hectares should be able to accommodate around 1,000 horses.

Be it on the desolate plateau of the Causses Méjean in France or on the Khomyn Thal steppes in Mongolia, both the French Tatin and the Mongolian Tserendorj agree that time there does not run at the same speed as in cities.

“The feeling of time and space is really special in the steppe area,” they told RFI.