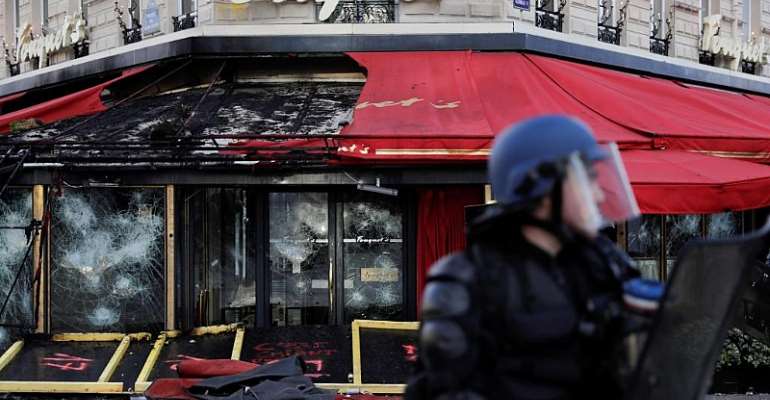 Paris police have ordered shops and restaurants located on the main route of Thursday's massive pension strike in the French capital to close over fears of fresh protest violence.

Shops, cafés and restaurants will be forced to close their doors Thursday to limit the damage to public buildings and other key sites on the protest route.

But police are worried about plans announced by some Yellow Vest groups to demonstrate alongside the striking workers to offer their support.

In an order published on Tuesday morning, the police prefecture said that in light of the "tense social context - in particular with calls by Yellow Vests to join the protest movement - there are serious risks that fresh violence and damage could take place in the French capital."

In March, Yellow Vest protesters ransacked boutiques and restaurants on the famed Champs Elysées avenue, and last month they again left a trail of destruction on the one year anniversary of the protest movement, which was infiltrated by Black bloc anarchists.

Police are asking shop owners to shut "terraces, decks and displays," and to "put away any furniture or tools that could be used as a weapon," and requiring them to install extra protection.

No cars will be allowed to park along the demonstration route either.

Businesses subject to the closures are those located in the 1st, 2nd, 3rd and 4th arrondissements of Paris - the most central areas.

Several important monuments will also be closed and placed under tight security. They include:

Similar security measures were also adopted during the last May Day rally, which saw "violence and vandalism" carried out by "determined and skilled thugs, interested in looting," the prefecture said.

The closures apply until the end of the scheduled demonstration, set to be at around 7pm on Thursday.