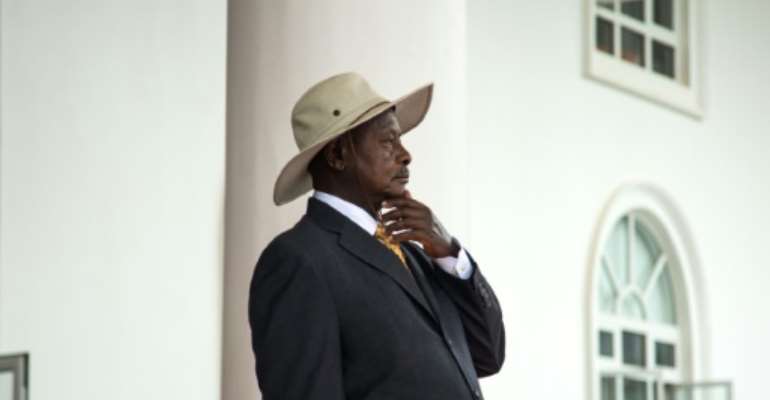 Uganda's President Yoweri Museveni led a march against corruption, but critics say he has done little to really tackle graft in his government. By Sumy SADRUNI (AFP)

Ugandan President Yoweri Museveni led thousands of civil servants, supporters and police officers on an anti-corruption walk through the capital Wednesday in move derided by critics as a meaningless stunt.

Central Kampala was locked down with businesses shuttered and roads closed, causing traffic chaos across the city as soldiers deployed heavily to protect the walking dignitaries including the speaker of parliament and the chief justice.

"Corrupt people are parasites," Museveni said at a rally following the walk, damning corruption as a "spiritual problem".

The corruption walk attracted criticism and mockery, with critics pointing out that Museveni has taken little action over several corruption scandals during his time in office.

"When the president of a country decides to walk against corruption instead of taking action, that country is doomed," Joseph Sabiti a spokesman for Action Aid Uganda, which has led civil society efforts to hold corrupt public officials to account told AFP.

"It's a mockery of the people of Uganda."

Since taking power in 1986, Museveni's scandal-plagued government has been repeatedly accused of corruptly extracting hundreds of millions of dollars from the public purse.

In 2018 a US court convicted a former Hong Kong government official over a multi-million-dollar bribery scheme in which a $500,000 (451,000 euros) bribe was paid into an account designated by Foreign Minister Sam Kutesa.

In 2012, the US and European governments were forced to temporarily suspend aid after allegations that $12.7 million in donor funds - allocated to help some of the poorest areas of Uganda following a devastating 20-year war - had been embezzled from Uganda's Office of the Prime Minister (OPM).

In 2013, Mike Mukula, a senior ruling party official, was convicted of raiding funds intended to fight diseases such as malaria and tuberculosis and for the treatment of children living with HIV/AIDS. The court heard that Mukula illicitly requisitioned and signed cheques for First Lady Janet Museveni.

Maria Burnett, a lawyer who wrote a report on corruption in Uganda for Human Rights Watch in 2013 following the OPM scandal, told AFP the walk was "nothing more than yet another distracting and superficial government effort to address corruption."

"Despite the many scandals - in critical areas such as access to vaccines - no high-ranking government official who managed any implicated office - for example, not a single minister - has served prison time for a corruption-related offence during Museveni's long tenure," she said.

"Today's walk is paved with impunity."

Opposition leader Kizza Besigye had announced plans to walk separately to protest against corruption but the spokesman for Besigye's Forum for Democratic Change party Ronald Muhinda told AFP the four-time presidential challenger had been arrested on his way into the city.