By Ish MAFUNDIKWA, with Zinyange AUNTONY in Bulawayo 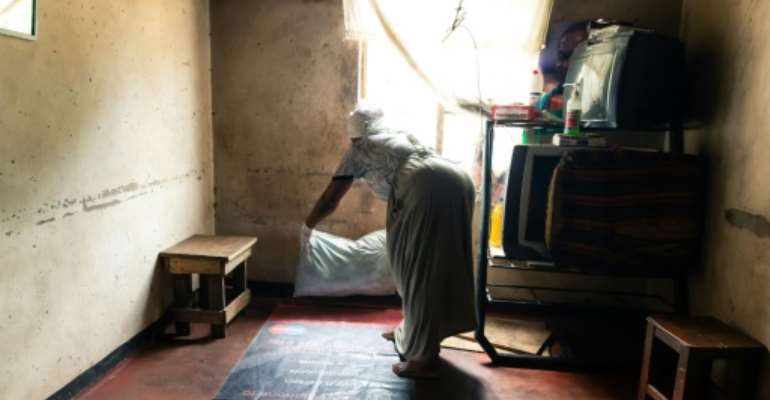 Where a child is born: Esther Gwena, 69, who acts as a midwife but has no training, lays down sheets in her rundown apartment -- a makeshift maternity unit. By Jekesai NJIKIZANA (AFP)

The floor is dusty, the walls filthy and the furniture decrepit, but for two weeks last month a tiny flat in a Harare township was transformed into a maternity clinic where scores of babies were born.

Its owner, 69-year-old Esther Gwena, says she helped to deliver 250 infants as Zimbabwe's health sector tottered -- a feat that earned comparisons to Florence Nightingale, the pioneer of modern nursing.

Hundreds of junior medics at state hospitals began a strike three months ago because their salaries -- less than $200 a month -- are not enough to live on in a country gripped by 500 percent inflation.

In need: Monica Bepu, 33, heavily pregnant with her second child, sits on a bench in the passage outside Esther Gwena's two-room flat in Harare. By Jekesai NJIKIZANA (AFP)

Nurses are only working two days a week.

Those who can't afford private care -- the majority of the 14 million people reeling under an economic crisis compounded by acute food shortages -- suffer at home or seek help from people like Gwena.

Senior doctors, in a letter last week, said state hospitals had become a "death trap" and warned of a "slow genocide".

Gwena, a widow and member of the local Apostolic Faith sect, is a self-taught midwife.

When the health services strike peaked last month, she came to the rescue.

'I had to do something'

"A man came to me and said there were two women in advanced labour at (a nearby clinic) but the place was closed because the nurses were on strike," she told AFP in her two-room flat in Mbare township.

She rushed there and found that one of the women had a baby which had died.

A moment for prayer: Gwena belongs to an Apostolic religious sect where she says she got her calling to take up midwifery. She says she has delivered as many as 250 children. By Jekesai NJIKIZANA (AFP)

"I took the other one to my place, where I helped her. The baby survived. From that time, I knew I had to do something," she said.

Word that she was helping deliver babies for free spread quickly.

A funeral services company chipped in with a mobile water tank and pitched a tent outside to serve as a waiting room for women before they went into advanced labour.

"I helped to deliver 250 babies ... (they) are alive and kicking and at home with their mothers," Gwena said.

Two weeks later, the government asked her to stop after a nearby maternity clinic reopened.

Winnie Denhere, 35, cradled her two-day-old baby boy outside the clinic, where she had taken him for an immunisation injection.

"Everything went very well, she didn't ask us for money," she said, speaking of Gwena, who brought her child into the world.

But while some laud Gwena as a selfless do-gooder, doctors worry that she exposed herself, the mothers, the babies to infection.

"We need to do something about our facilities so no one goes to her," Harare's director of medical services Prosper Chonzi, said.

Medicines have been in short supply and broken machines go unrepaired.

The government has fired 448 junior doctors for striking.

Gwena collects water in a bucket as she prepares for a long day. By Jekesai NJIKIZANA (AFP)

A senior doctor, speaking on condition of anonymity, said the situation has become untenable.

"There is no public health in Zimbabwe at the moment; everything has come to a standstill," he said, adding: "Patients are dying".

Even the scarce equipment is often not right.

"One needs gloves that fit just right when performing delicate operations, but we get old gloves that are too big," said another doctor.

A UN special rapporteur Hilal Elver on food security last week spoke of "disturbing information" that public hospitals had exhausted food stocks, forcing them to seek humanitarian aid and that medical equipment in some cases was "no longer operational".

In the second largest city of Bulawayo, Zimbabweans living abroad are helping in a small way by crowdfunding and sending money back home to offer health care for the vulnerable.

One such initiative is Citizwean Clinic, which opened its doors last month and attended to hundreds of patients in the first five days -- providing free consultation and drugs.

"We go to the hospital these days it's bad, there are no doctors. We heard that there were doctors here," said hypertensive patient Elina Dzingire, 63.

"We've really been helped here," she told AFP from the clinic in the city's Cowdray Park township.

Health Minister Obadiah Moyo admitted the situation in hospitals is constrained but says the government will soon advertise the posts left vacant by the sacked doctors.