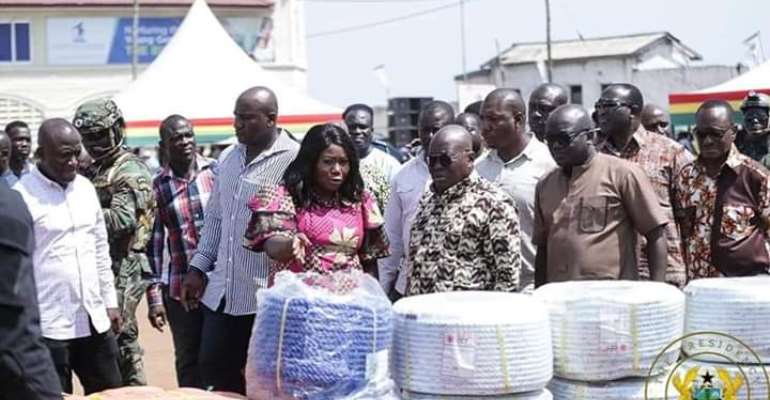 The President inspecting some of the equipment before the presentation

President Nana Addo Dankwa Akufo-Addo, through the Ministry of Fisheries, the Coastal Development Authority, the Agricultural Development Bank and CFAO, has presented some 6,336 outboard motors and other fishing equipment to fisherfolk along the coast.

Presenting the equipment on Tuesday, 3rd September, 2019, during the 2nd day of his 3-day tour of the Greater Accra Region, President Akufo-Addo indicated that this is the first batch of outboard motors, out of a total of 10,000, to be distributed to fisherfolk at subsidized prices.

Thanking fisherfolk in the country for adhering to the close season, the President indicated that “I am also happy to hear that the leaders and citizens appreciate the work that the government is doing.”

He continued, “I have been informed that the traditional priests (Wulomei), themselves, have asked that another month be added to the close season for the artisanal fishermen and for the trawlers, two more months.

"They, themselves, have seen the benefits of the close season, so I will also like to ask that you also put a stop to the practice of light fishing. This way, we will really be able to see some progress.”

The Minister for Fisheries and Aquaculture Development, Hon. Elizabeth Afoley Quaye, indicated that bowls, outboard motors and several other things, were to be given to the fishermen.

“Ever since we came to office, we have been gathering resources to get you as many outboard motors as possible. The Coastal Development Authority is bringing 5000 outboard motors. ADB and the Ministry of Fisheries is bringing 1,336 as well,” she said.

The Minister appealed to fisherfolk to use the outboard motors for large-scale fishing and not light fishing, “so that we can reap the full benefits of the vessels that we have brought. The women are tired of buying fish from light fishing. This is the little I have to say.”

To the women engaged in fishing, she stated that the small-scale loans to be given to them are ready.

“We will distribute the loans amongst members of the National Fish Processors Association for their use. This year, we have heard that you have caught a lot of fish and they just need the money to work on the fish. We are also bringing more Ahotɔ ovens, 3,000 of them,” Hon. Elizabeth Afoley added.

She revealed that, last year, “we brought 350 of them but this year, we got some more funding to build more of the ovens for you. We will also provide you with insulated containers, in collaboration with USAID. We distributed some in Tema. We are bringing more this year.”

Touching on the storage facilities, she indicated that a bumper harvest has been recorded this year, and “the catch this year is more than the cold stores can take”.

With Government owning 6 cold stores across the country, she admitted that those put in charge of the cold stores did not take good care of them.

“This year, the law has allowed us to give the cold stores to companies that can take better care of them, so we are in the process of changing ownership. We are working on restoring power to the cold store at Prampram so that it can be reopened for use,” she added.