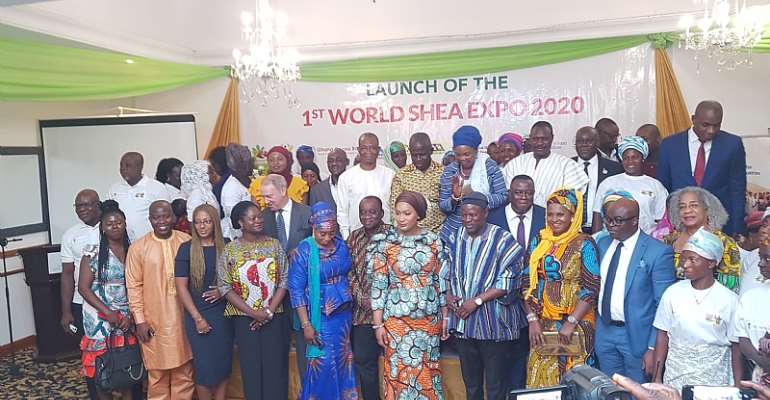 The first World Shea Expo has been launched in Accra under the theme, "Repositioning the Shea Industry to Accelerate Ghana's Export Diversification Agenda Within the Context of Ghana Beyond Aid."

The main event which will take place in Tamale from April 22 to April 25, 2020, will bring together investors, pharmaceutical companies, research organisations, women's groups, players in the cosmetic industry, government agencies as well as women's groups to promote the export of shea.

Speaking during the ceremony, the Second Lady, Samira Bawumia, said, government, aware of the economic potential and contribution of shea to the economy of Ghana, has given it top priority under the Planting for Food and Jobs programme to boost production for local processing and export.

She said the picking and processing of shea serves as a source of livelihood to many rural communities across West Africa, particularly in the Northern part of Ghana where improved production has increased Ghana's export 600 percent over the past decade.

She said even though global demand for shea keeps growing, challenges such as unfair pricing in the world market, felling and burning of shea trees as well as attacks on shea nut pickers (mostly women) must be addressed in order for the nation to benefit fully from the industry.

The Chief Executive Officer of Savannah Golden Tree Limited, organisers of the Expo, Rashid Zakaria, said the initiative will highlight the importance of the local shea industry to attract the necessary attention needed to speed up government efforts towards diversifying export commodities and finding worthy competition for the nation's primary export cash crop, cocoa.

He said the Expo will also showcase the contributions of women who pick the nuts from the wild as well as small and medium scale enterprises who make it possible for shea to reach its final users.

Shea nut, the raw material for shea butter, is obtained from shea trees which are found in the savannah region of Western, Eastern and Central Africa.

According to statistics from the Ghana Export Promotion Authority (GEPA), Ghana exported a total 90 million dollars worth of shea and its derivatives in 2018 alone.