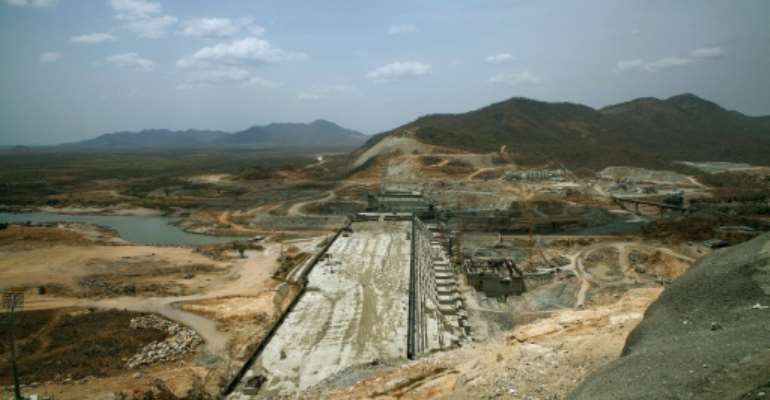 Ethiopia's Grand Renaissance Dam is set to be Africa's largest when it is completed. By ZACHARIAS ABUBEKER (AFP/File)

Ethiopia's construction of a massive power dam on the Blue Nile is raising tensions with Egypt, which depends on the river for 90 percent of its water supply.

As the neighbours and Sudan met in Cairo for talks Monday and Tuesday on the potential conflict flashpoint, here is some background.

At 6,695 kilometres (4,160 miles), the Nile is one of the world's longest rivers and a crucial supplier of water and hydropower in a largely arid region.

The two main tributaries -- the White Nile and the Blue Nile -- converge in Khartoum before flowing north through Egypt and into the Mediterranean Sea.

Around 84 billion cubic metres of water is estimated to flow along the Nile every year.

Ethiopia in 2011 launched construction of the Grand Renaissance Dam on the Blue Nile, roughly 30 kilometres from the border with Sudan.

It will produce about 6,450 megawatts of electricity, making it Africa's biggest hydroelectric dam and doubling Ethiopia's electricity output.

Egypt, an arid nation of nearly 100 million people, depends on the Nile for around 90 percent of its water needs, including for agriculture.

It says its rights to the Nile's waters are protected by a 1929 treaty which guarantees it a significant quota, and gives it veto power over construction projects along the river.

A 1959 treaty boosted Egypt's allocation to around 66 percent of the river's flow, with 22 percent for Sudan.

But in 2010 Nile Basin countries, excluding Egypt and Sudan, signed another deal, the Cooperative Framework Agreement, that allows projects on the river without Cairo's agreement.

Ethiopia, one of Africa's fastest growing economies, insists the dam will not affect the onward flow of water.

But Egypt fears its supplies will be especially reduced during the time it takes to fill the 74-billion-cubic-metre capacity reservoir.

The two sides need urgently to compromise on a timeline for filling the dam, think-tank the International Crisis Group said in a report in March 2019 that warned the issue was a potential flashpoint.

Ethiopia initially wanted it filled in three years so the dam could be operational as soon as possible, the report said. Egypt had asked for 15 years, which would have less downstream impact.

After talks in Washington under US mediation on November 6, Egypt, Ethiopia and Sudan agreed to a series of technical meetings with the aim of resolving their differences by January 15.

The three countries will hold a new meeting next Monday in Washington following the Cairo talks.