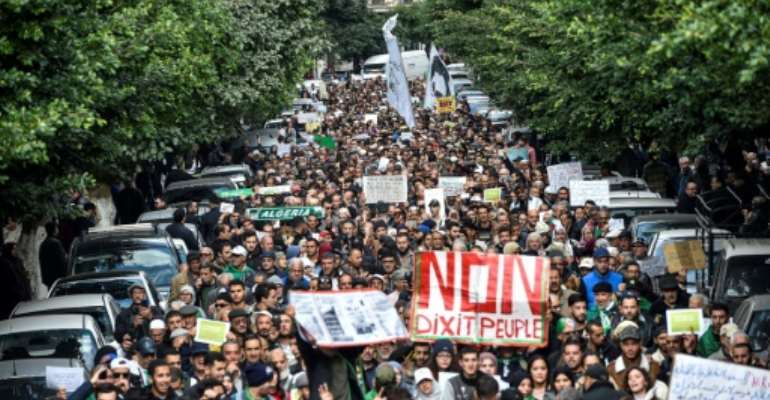 Algeria's military chief called Tuesday for massive voter turnout in the country's sharply-disputed December 12 elections to serve as a "slap in the face" of its enemies.

"If November marked the liberation" from French rule, said General Ahmed Gaid Salah, referring to the November 1954 start of the country's war of independence, "December will have the honour of finalising the construction of a state of law".

"The Algerian people will know... how to respond to all its detractors plotting against the fatherland by heading in massive numbers to the ballot stations," he said in a speech published by the defence ministry.

Gaid Salah, the country's strongman since the April resignation of longtime president Abdelaziz Bouteflika after months of street protests, said a large turnout for the election would deliver "a stinging slap to all those attacking Algeria".

A European Parliament resolution on Thursday condemned "the arbitrary and unlawful arrest and detainment of, attacks on and intimidations of journalists, trade unionists, lawyers, students, human rights defenders and civil society and all peaceful protesters" in Algeria.

Algiers reacted by condemning what it termed "flagrant interference in its internal affairs" and "disregard" for its institutions.

Gaid Salah said the Algerian army "deserves all the respect, consideration and support" of the people, in the face of massive anti-regime demonstrations at which protesters have chanted "to the garbage with the generals".

On Tuesday, hundreds of students staged their 41st weekly protest in central Algiers in opposition to the presidential election.

In comments the same day, Interior Minister Salah Eddine Dahmoune, speaking in the upper house of parliament, attacked opponents of the vote as "traitors, mercenaries, homosexuals" and puppets of colonialists.

Anti-vote protesters, who have been staging massive rallies every Friday, fear the poll will cement in power politicians close to Bouteflika and the old regime.

The five candidates standing all either supported the former president or had roles in his governments.