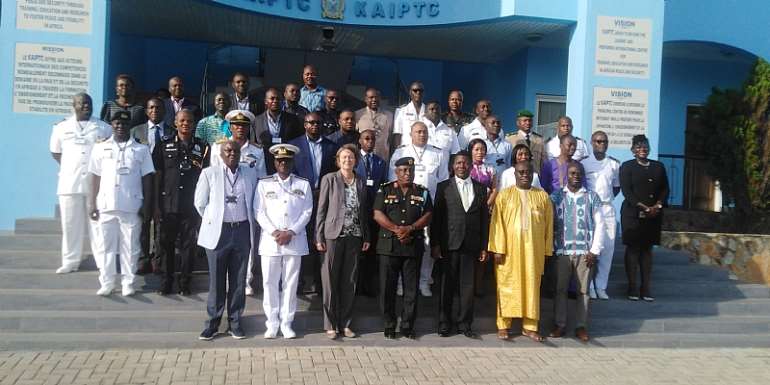 The Chief of Naval Staff, Rear Admiral, Seth Amoama has disclosed that despite the limited resources available for his men to work with, the enormous responsibility of the forces in the Gulf of Guinea is very huge and highly commendable.

He said as naval forces in the Gulf of Guinea, the threats of invoking their ‘policing roles’ is disturbing despite their efforts at safeguarding the territorial waters.

Speaking at the First National Forum on Maritime Security on the Gulf of Guinea in Accra, he said “As National Navies, we need to work together against the transnational threats to maritime security in the Gulf of Guinea. That said, achieving that sense of cooperation is work in progress”

On ECOWAS, he mentioned that the Committee of Chiefs of Defense Staff has set up a network of Chiefs of Naval Staff which regularly sit as sub-committee.

He further mentioned that as parts of the implementation of the Yaounde Code of Conduct, Ghana also hosts the ECOWAS Maritime Zone F which groups the countries between Ghana and Liberia as well as Burkina Faso to work together to preserve the marine resources in the territorial waters.

He explained that members of the Multi-National Maritime Coordination Centre (MMCC) Zone F have signed series of Memoranda of Understanding (MoU) to form the cornerstone for multinational cooperation.

“Ghana remains committed to all these initiatives and awaits the outcome of its fruitful deliberations in the next few days,” he mentioned.

Rear Admiral, Seth Amoama commended the Government of Denmark for funding the forum.

Danish Ambassador to Ghana, Tove Degnbol mentioned that the Gulf of Guinea is essential to the economies of the countries bordering it.

She said “About 90% of the Region’s International trade is moving by sea, the offshore oil sector has an estimated 4.5% of the world’s reserves and have only started being developed, and fishery is providing the livelihood for millions of people."

She added that shipping is inherently global, and for International seafaring nations such as Scandinavian, the Gulf of Guinea is important.

She mentioned that Denmark is a prominent maritime nation with strong seafaring traditions.

Madam Degnbol was confident that the forum will support research, training of maritime security practitioners among others to help establish a dialogue among the International and National Actors.

Commandant, Kofi Annan International Peacekeeping Training Centre (KAIPTC), Major General Francis Ofori stated that the Gulf of Guinea is the hub of extensive trans Atlantic commerce connecting the western parts of Africa with the rest of the world.

He said “Maritime threats are a common phenomenon especially in the Gulf of Guinea. Reports from the International Maritime Organisation (IMO) and a plethora of similar International and Regional Agencies often identify issues such as attacks on sea-based transportation equipment, networks and cargoers.”

He added that the Maritme Domain is one big space that enjoys the confluence of transnational economic resources, state authority, commerce and crime.

He noted that the KAIPTC and its partners are optimistic that the full implementation of this project will enhance comprehensive national and regional response to the threats to maritime safety and security particularly in the Gulf of Guinea.