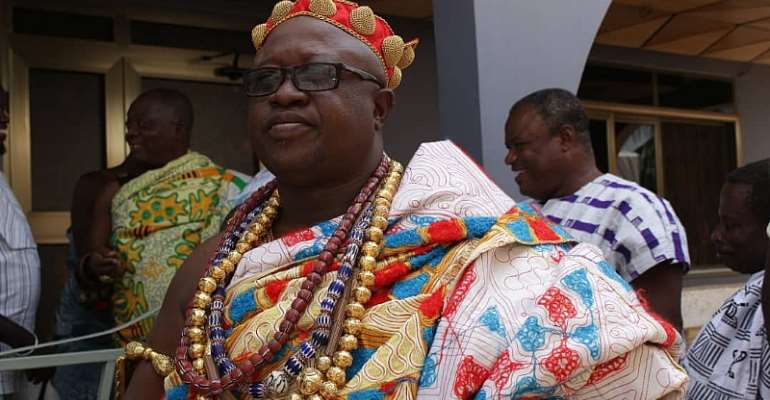 Nii Tetteh Oglie II last Saturday celebrated his fifth anniversary as Chief of Nmlitsakpo, near Kpone in the Kpone-Katamanso Municipality of the Greater Accra Region.

The anniversary, which he preferred to call ‘Nmlitsakpo Grand Durbar’, was under the theme, “The Role of Chieftaincy and Traditional Authorities in Community Development”.

There were thrilling cultural and patriotic performances from pupils from the Nii Oglie Model 1 Basic School (a school founded by the Chief), Bensar School Cadet, Love and Unity Group and Tsi Music and Dance Ensemble.

Addressing the gathering Nii Oglie II thanked the almighty God for protecting him for the last five years since becoming Chief of Nmlitsakpo and the people for their continuous support over the years.

He called on traditional rulers, especially Kingmakers to adhere strictly to the laws governing chieftaincy, to avoid the situation where motivated youth are pushed onto the streets to cause “bloodshed, maiming and brutalizing of innocent people and several cases being contested in our law courts”.

He also called on President Nana AkufoAddo, Members of Parliament (MPs) and all those who matter in the decision making process to consider amending aspects of our law to allow the appointment of the IGP and the CDS to be left in the hands of the top hierarchy of the Ghana Police Service and the Ghana Armed Forces.

This, in his opinion “…will go a long way to properly enforce security in this country as well as depoliticize our security services”.

Nii Oglie II reminded the MCE of his promise to fix the roads in the area adding; “I am therefore taking this opportunity to remind him to keep his promise, as the roads are getting worse by the day”.

Touching on sanitation, the Nmlitsakpo Mantse cautioned those who direct or empty their waste water on streets and open spaces in the area to desist from the act, saying they will be penalized when caught.

He observed that effective next year, with the support of residents of the area, the Divisional Council would commence the construction of a public toilet within the Community.

Furthermore, he talked about his decision to construct a befitting palace with offices and other facilities for the Community.