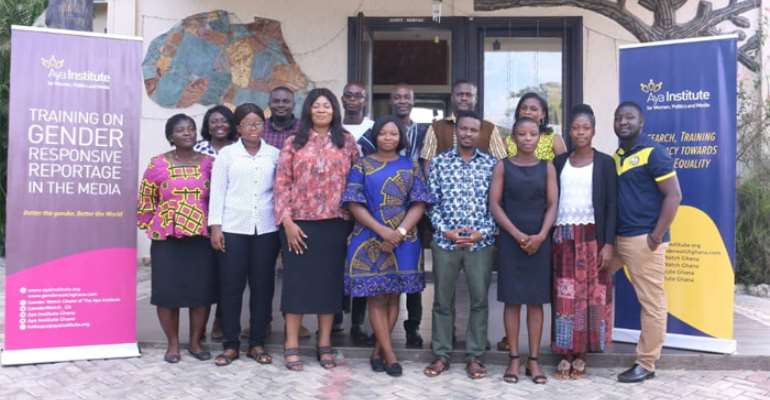 A group picture of the participants with Dr. Agyepong (third left)

Ghana's political landscape has been described as too hostile for women, a researcher in gender, politics and media, Dr. Lawrencia Agyapong, has observed.

According to her, the political environment is so acrimonious and monetized to the extent that very few women are able to thrive in the endeavour.

It is therefore no wonder that there are just a handful of female political and national office holders as compared to males.

Data collected by Dr. Agyapong's research and training institution, AYA Institute indicates that as at February 2019, there were 238 male parliamentarians as compared to 37 females.

This figures when distributed across the political parties; show NDC's 106 parliamentarians comprises of 13 women against 93 men while NPP's 169 has 24 women against 145 men.

At the local government level, out of the 6,019 electoral areas during the 2015 district level elections, 5,736 males were elected as against 283 females.

Gender distribution of Presiding members of 228 out of 254 Metropolitan, Municipal and District Assemblies (MMDAs) shows seven females as against 221 males.

Describing the statics as worrying and a tip of the iceberg, she said, “We as a country, must prioritise gender parity to ensure women who form a larger chunk of our population have equal representation and voice, especially at the decision making table which is now male dominated.”

She spoke in Ho, at a Training Seminar targeted at making journalists in the Volta Region gender responsive.

According to her, it was not enough for politicians to reduce the cost of filing feels for females interested in taking up positions in their party, but rather making the filling fee free would be a much bolder step towards bridging the gap internally.

Apart from that political parties must make bold initiatives to reserve safe seats for competent females who express interest.

She bemoaned the lackadaisical attitude of parliamentarians (male dominated) in passing the Affirmative Action Bill which has gone in and out of parliament for about a decade and urged them to pass the bill before the current parliament is dissolved.

A lecturer of Ghana Institute of Journalism and former broadcast journalist, Dr. Etse Sikanku stressed that the media has the power to bridge the gender gap, by ensuring the voices of females are heard.

This, he said, must be done professionally with the focus on competence, intellect and contribution to the national discuss instead of stereotyping, sexualising and patronising women.

He admitted that although it was a daunting task, the media must give the gender parity agenda all it can, through research, analysis and advocacy until there is an equal representation of women and men in all facets of the Ghanaian economy, especially politics.