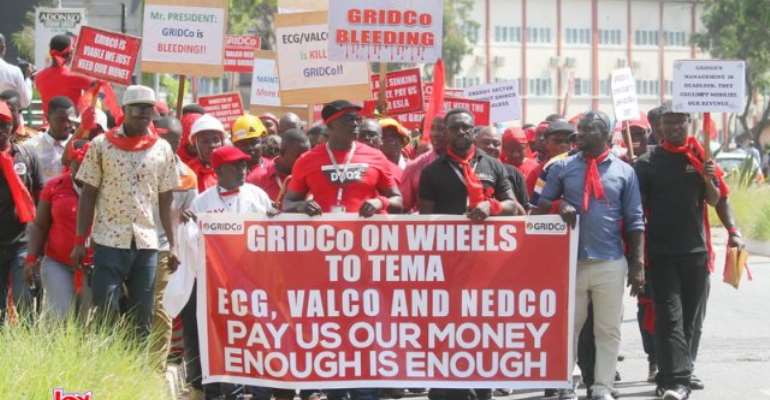 Power cuts may characterise the Christmas festivities if staff the Ghana Grid Company Ltd (GRIDCo) carry out their planned industrial action from December 10.

GRIDCo staff has threatened to stop work completely from December 10 debts owed them by the Electricity Company of Ghana (ECG), the Northern Electricity Distribution Company (NEDCo) and the Volta Aluminum Company (VALCo) are not settled.

Presenting a petition to the Deputy Minister of Finance, Abena Osei Asare, on Tuesday after a mammoth protest march by hundreds of staff of GRIDCo, Chairman of National GRIDco Saff Association, Rafael Konor, said the total withdrawal of services would have started on Wednesday, December 4, but for the petition they have presented.

Mr Konor said the new critical date that the government and all stakeholders must note is December 10.

GRIDCo runs the National Interconnected Transmission System (NITS) which ensures the transmission of electricity from wholesale suppliers (generating companies) to bulk customers, which include the ECG, NEDCo among others.

GRIDCo staff are demanding that some GHS250 million which President Nana Akufo-Addo directed the Finance Minister to pay GRIDCo be carried out.

The GRIDCO leadership has been pushing the payment of these millions since the beginning of this year.

Clad in red and black attires, protestors brandished placards on Tuesday to drum home their concerns and marched from the Black Star Square to the Finance Ministry.

PHOTOS: Ghanaians hit the streets of Accra for #FixTheCountr...
25 minutes ago