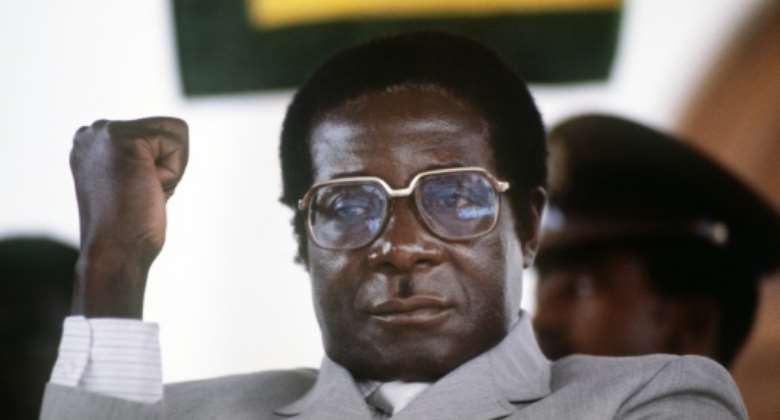 Mugabe, pictured in July 1984 at the height of his 37 years in power. By ALEXANDER JOE (AFP)

The state-owned Herald newspaper said his daughter, Bona Nyepudzai Mutsahuni-Chikore, disclosed these assets to the High Court after the family had been unable to locate his will.

The $10 million (nine million euros) was in a foreign currency account with a local bank, the Commercial Bank of Zimbabwe (CBZ), the report said.

It did not identify the make or model of the 10 cars.

During his presidency, Mugabe, who styled himself as a leftwing radical, was reported to own several farms that were seized during his controversial land reforms.

Only one farm is listed on the inventory of his assets.

His other properties, according to the list given to the High Court on October 21, include two houses in posh suburbs of the capital, Harare; his rural homestead in Zvimba; a two-hectare (five-acre)farming plot in Zvimba and a five-acre orchard.

Mugabe, who ruled Zimbabwe from the country's independence from British colonial rule in 1980 until being ousted in November 2017, died on September 6 at the age of 95 in Singapore, where he had been receiving treatment for prostate cancer.

"Mrs Grace Mugabe was listed as the sole surviving spouse while Bona, Robert, Bellarmine and stepson Russel Goreraza were listed as surviving children," The Herald reported.

Mugabe once said in jest that he would remain in power until he turned 100.

He was ousted after 37 years in power and replaced by his former deputy Emmerson Mnangagwa, whom Mugabe had fired weeks earlier.

The later years of his rule were characterised by food shortages, massive joblessness and the use of brutal force against his opponents.

Many had hoped Mnangagwa would fare better but the hardships that Zimbabweans suffered under Mugabe have returned to haunt the country.

According to the World Bank, extreme poverty is likely to affect 5.7 million Zimbabweans this year -- equivalent to 34 percent of the population, after 29 percent in 2018.

Gross domestic product is likely to contract by 7.5 percent in 2019, it says.

Museveni apologises over son's Twitter rant on Kenya
42 minutes ago

Paramount Chief of Bunkpurugu commends Bawumia for his good ...
51 minutes ago