Anti-Corruption And Transparency (ACT) Week; Citizens Urged To Join In The Fight Against The Canker 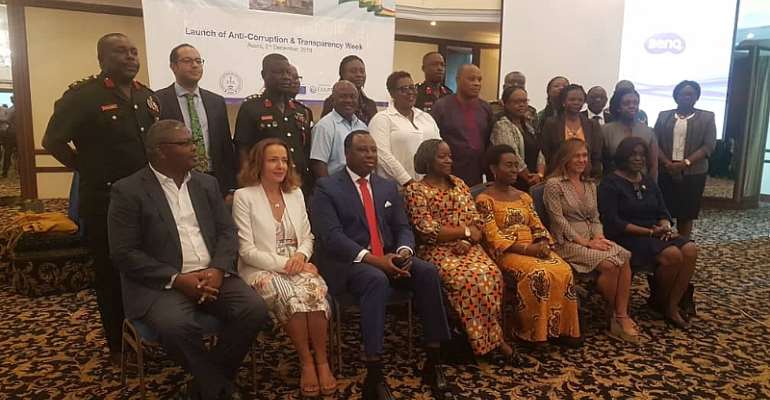 Ghana's Ambassador to France, her excellency, Anna Bossman has called on citizens to join in the fight against corruption in the country.

She said it is important for institutions to have men and women with strong moral character to take hard decisions that would bring corruption under control.

"Ghana's law cannot execute themselves, the presence of worthy people who can execute the laws will keep the laws alive without these worthy people laws would be rendered useless. The laws of governance provide the basis while men and women of noble character put them into practice", she said.

Speaking at the launch of anti-corruption and transparency week in Accra on Monday, December 2, 2019, the ambassador argued that “When a person has done something wrong and there are clear violations, it has to of course be investigated properly, etc. I’m not saying that they should be witch-hunting or anything, no. What I’m saying is that when there have been good investigations, credible investigations and we have found that somebody, whether it is a public officer or a corporate person has done something wrong, the…correct sanctions should be applied without fear or favour.”

Maria-Luisa Troncoso, head of the governance section, European Union, stated that the fight against corruption must testify in order to achieve SDGs.

"in order to create a conducive environment for foreign investment, for private sector development, thus for generating growth and jobs, we cannot tolerate corruption".

This year’s celebrations which started yesterday 2nd and end on 9th December 2019, is on the theme “NACAP: Mobilizing National Efforts and Resources to Combat Corruption, Five Years on”, would bring together stakeholders from government, public and private sectors, academia, media, civil society and the general public among others.

The ACT Week was organised by the Commission for Human Rights and Administrative Justice (CHRAJ) in partnership with the Office of the President, the Attorney General’s Office, Judicial Service, Economic and Organized Crime Organisation (EOCO), National Commission for Civic Education (NCCE), Ghana Police Service (GPS), Bank of Ghana, Financial Intelligence Centre (FIC), Ghana Anti-Corruption Coalition (GACC), PenPlusBytes and other stakeholders, with the support of the European Union through its Accountability Rule of law and Anti-corruption Programme ARAP), implemented by the Spanish public foundation FIIAPP.

The ACT week would also feature a myriad of activities at both the national and sub-national levels. Key among them are International Forum on Assets Recovery, Money Laundering and Mutual Legal Assistance on December 4, Forum on Integrity for Youth on December 5; and the NACAP High-Level Conference to commemorate the International Anti-Corruption Day and the GII Integrity Awards on December 9.

The Ghana Anti-Corruption Coalition, with the support of OSIWA, will be conducting regional outreach activities in markets, churches, and mosques, with two final floats on December 7 in Ho and Takoradi.

In addition to these activities, a TV advertisement has been produced and will be airing on national television throughout the week, highlighting the joint collective efforts taking place throughout Ghana to curb corruption.

Corruption continues to be a problem that has permeated every sector of global economies.

With its devastating effects, it undermines sustainable development and is an affront to human rights. It further distorts markets, competition, institutions as well as entire governance structures.

Arguably, corruption has been identified as a major root cause of poverty, deprivation, and underdevelopment. In the particular case of Ghana, the high prevalence of corruption has resulted in poor service delivery and a lack of access to basic necessities of life. Corruption is equally a threat to Ghana’s democratic ideals (particularly the rule of law, justice for all and equality before the law).

Against this backdrop, the ACT Week is a platform that seeks to create a national discussion to assess the implementation of Ghana’s anti-corruption policy, the National Anti-Corruption Action Plan (NACAP) and reinforce commitments by implementing partners for the years ahead.

The ACT Week also seeks to reinforce the ever-pressing need of making corruption a high risk and a low gain venture in Ghana whilst creating the needed public awareness on the dangers of corrupt practices.

The different events will further advocate for sustained inter-agency collaboration and partnerships as well as the need to adequately resource anti-corruption agencies.