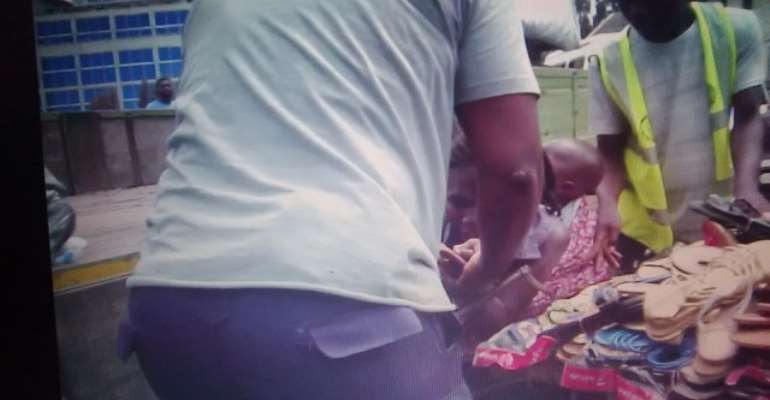 Trained and tasked to tackle tricky trading and traffic to tidy up our town, AMA taskforce topshots have totally turned into treacherous tyrants and tin gods, terrorising traders, taking tips, toying with and turning the whole thing into a tangle of thievery and turpitude.

Tiger can tell in truth this time that things are not tidy. Time the topshots stem the tide.

Some members of the Accra Metropolitan Assembly's (AMA) City Guard, popularly called Abayee, have been caught in a secret video pushing and shoving a hawker with a baby at her back amidst insults and threats of beating her if she doesn't cooperate with them while they seize goods from hawkers and traders on the streets and pavements around Tudu, Accra in a brazen show of force.

The assaulted hawker is a baby-carrying mother identified only as Aboloway who sells different types of footwear on a cart-truck.

What initially looked like a normal activity of the Abayee - seizing hawkers' goods amidst pleas for mercy by the victims turned into a heated and a messy confrontation between Aboloway and the Abayee. The members of the metropolitan taskforce pushed, shoved and insulted the hawker in reckless disregard for the safety of her child precariously tied to her back and without heeding the fervent pleas of held on grimly to her goods to prevent them being packed into the operation vehicle. It was a desperate situation for the hawker who eventually had to tighten the cloth she was carrying her baby with to avoid a potentially fatal fall, given the violent jerking she was receiving from her assailants.

The city guards, meanwhile, took advantage of that distraction to pack her goods into the bucket of their pick-up. The tenacious woman grabbed her child and sprang into the vehicle insisting that she needs to accompany the goods to prevent them getting lost.

In the face of the resilience and never-give-up spirit of Aboloway, the leader of the Abayee team threatened to beat her and to pull her out of the vehicle if she did not climb down. When she refused to be cowed by the threats the leader of the Abayee grasped her hand and nearly pulled her down, but for the timely intervention of his fellow guards.

The persistent and battered Aboloway remained in the operation vehicle while they kept seizing and loading more goods into the car without bothering whether she and her baby were been hit or not till they got to the AMA office next to the Kwame Nkrumah Mausoleum in Accra where all the seized goods were sent and not even the health condition of her baby could make the stubborn and defiant Abayee rescind their decision.

When she returned to the office the following day for her goods as she was given the day the goods were seized, a lady who works at the AMA office asked her to go and apologise to the leader of the Abayee group that seized her goods as she claimed the hawker insulted him while he was doing his work. Aboloway, however, insisted never insulting him but only insisted to be in their vehicle to prevent losing her goods. The lady at the AMA office however insisted until she, Aboloway, apologises to the leader of the Abayee group, her goods won't be released to her and not even the cries of her sick baby would make her change her stand.

In a related development, a shop owner at Tudu clashed with one of the leaders of Abayee in a heated altercation over the shop owner deciding to open his shop on a day meant for general cleaning. The Abayee leader tried to stop the shop owner from opening his shop amidst threats that he will cause the businessman’s arrest if he went ahead to open the shop.

The shop owner on the other hand insisted he’s even opened the shop already and called the Abayee’s bluff.

Tiger also filmed a guard beating a young man he claimed was a thief while another hawker was slapped and threatened by some of the Abayee just because he didn’t heed to their calls.

Also, an Abayee group threatened to beat a hawker who was resisting them, the Abayee guys, seizing his carting truck and goods as they pushed and shoved him about. When Tiger tried to intervene, one of the Abayee explained that the hawker had been caught selling at an unapproved spot and, instead of agreeing to make a deal to resolve the issue, he was proving stubborn.

Contrary to The Promise by The AMA
It would be recalled that Mr Gilbert Nii Ankrah, the Public Relations Officer (PRO) of the Accra Metropolitan Assembly (AMA) in February 2019, said in an interview in Accra that the AMA, under the leadership of Mr Mohammed Adjei Sowah, had embarked on a transformational development agenda dubbed “Sustainable Smart City” that would ensure that the city is free from the chaos, congestions and inordinate buildings.

He, however, assured hawkers and traders within the CBD zone that the decongestion exercise would be undertaken with a human face to reduce the incidence of altercation with the city guards, which sometimes leads to the destruction of trader’s goods.

“The AMA Chief Executive believes that the informal sector contributes a lot to the economy and for him to clear them without proper planned activities, will deprive them one way or the other of their livelihood.”

On the evidence of the above indiscipline on the part of city guards in their enforcement of the bye-laws, the smart city concept is far from a reality.