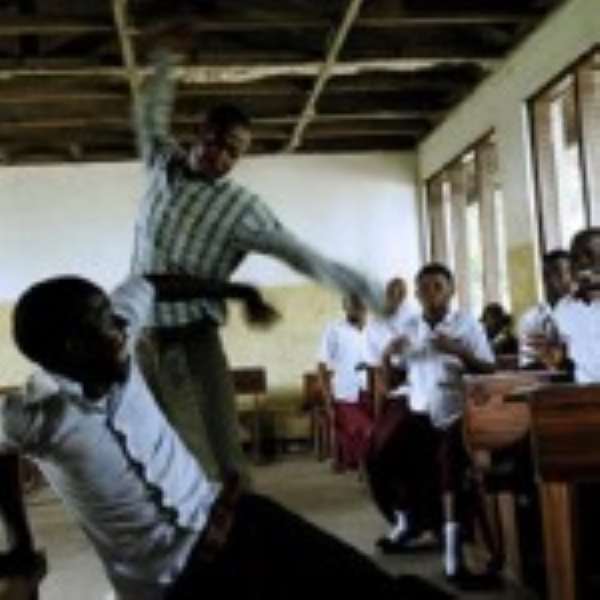 I read and hear this a lot. "I'll beat my child. My parents did, so why shouldn't I?" Okay Brock Lesnar chill for a second. You don't even have a child yet and you're already salivating.

That said, as a young child I used to dislike my dad (may his soul rest in peace). That man would cane me for anything! Like one time it was past my 6pm "curfew" and I was still outside because it was raining and my neighbours wouldn't let me leave until after. As soon as I got back to meet his angry sweaty face pounding fufu, he asked me to stoop (bend to place one hand forward on the floor and one leg raised backwards) until he was done. When he was done, he asked me to go and bath and to me that was a let off. Only to be at the receiving end of whips from one of his old radio wires as soon as I went naked. Now I laugh about it but it wasn't a joke back then and made me wonder if I was adopted. Did it make me stop? A few days yes, but after that it was the same old story

There were countless times, like a friend could visit me and escorting them out to the streets would warrant a call to my class teacher requesting that I be punished. It was tough. Did I change then, No. Did I dislike him, yes. Was I afraid of him, yes. When he changed his approach towards my teenage years, I got to know and appreciate him for the wonderful person he was. This article would look at obsession to bear children, effects and other less abusive alternatives that have been proven to work

"Spare the Rod, Spoil the child"
The problematic phrase that made children all over the world miserable. Or the misunderstanding of it? . The word "rod" used implies discipline, correction, not inflicting physical and emotional pain on children. Shepherds around the time the phrase was coined, carried rods that were curved on one end and used to guide lambs. The curved end was to carry them when in trouble, not to beat the lambs.

Just like lambs, children are just clueless and are trying to understand societal norms and human ways. They’re trying to find their place in the world. Even as adults, we haven’t fully understood life and human ways, so isn’t it hypocritical? We all make mistakes, adults and children, yet one is beaten for it just because they’re kids.

Obsession with beating in school
As someone who did my national service in a basic school, this is disheartening. I refused to use cane in my one year in the school and I could feel judgmental eyes from some of the teachers. Six months in I got fed up and argued for the prohibition of canes in the school, to the displeasure of some teachers in the school. I was usually met with "they said we shouldn't cane and school is now messed up with no discipline". How is it not because of laziness and incompetence exhibited by some headmasters and teachers? Or the failure of the Ghana Education Service and government to provide school materials and proper infrastructure? It's somehow the absence of caning? How come you still need to use the cane? Shouldn't it have worked if it would? How long would you use until we see change?

Caning or bruising only scars children for the rest of their lives. Sometimes we think we're okay because we haven't had a crisis but that doesn't mean our mind is okay. So let the i-turned-out-okay-so-they-will statements cease. Already thinking of beating your children even when you've not even conceived shows that you didn't turn out okay.

Beating children only drives them farther away from you and makes them fear you, like in my case. Such parents/ teachers find themselves in situations where their children don't open up to them unless forced to spill.

Alternatives
Reinforcement
This is any pleasant object or stimulus that causes a behavior to be repeated or increases the likelihood of a behavior occurring. When you realize that your child enjoys a certain action (like going out to play with friends) you can use that to achieve the desired change you want to see. Reinforcement is grouped into two categories; positive and negative. In positive reinforcement, the individual is presented with something pleasant when a desirable behaviour has been observed. So for instance, a parent can reward a child with an hour of gaming (reinforcer) after going through their notes or doing their homework (desired behaviour). In negative reinforcement, guardians or parents may take away privilege to video games when children haven't studied or done their homework. Parents may suspend video gaming until their kids have performed the desired behaviour. This is a great way of motivating a child to change or act in a desired way

Having heart to heart talks
Back to my dad, so when I was around 11 he stopped beating. He decided to try a recommended method of talking to us when we made mistakes. He'd just call us, not happily of course. He talked while we stood in attention with hands at my back. (At this point, I could stand forever) It was then we started understanding why he didn't want us to do certain things, or what our shortcomings were and then we discussed the way forward. If it were for something I did to my siblings, he didn't have to force me to apologize. His explanation (sometimes scolding) would make me feel sorry for my actions.

In the school, not caning got me a lot closer with the students, and it gave them freedom to talk to me about personal stuff or ask questions they otherwise couldn't ask from other teachers. In my time with them, I realized how they questioned the reasoning behind the canings and let out their frustrations to me. They believed some of the punishments weren't justified so I spent time talking or discussing with them and I'd let them know the reasoning behind it and if they were justified I'd let them know too. This somewhat "changed" (maybe only around me) how they acted or reacted in certain situations.

Caning or other related forms of abuse only tell children that something is wrong. It doesn't tell them why they shouldn't do it. Telling them they shouldn't do it just because you say they're wrong is unhealthy and they grow with internalised misconceptions about themselves and the society.