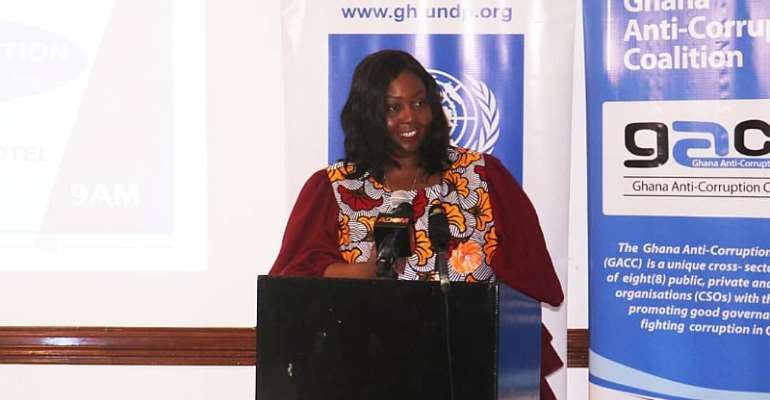 The Head of Governance of UNDP Nana Teiba Chinbuah has stated that Anti-Corruption has been a priority on the good governance agenda for decades.

This because corruption impacts negatively on the development of a country; it undermines good governance and the role of law, erodes confidence and trust in the public sector.

According to her, it threatens economies by undermining fair competition and discouraging investment and trade. It disproportionately affects disadvantaged groups by preventing social including, promoting inequality and inhibiting prosperity,' she said.

Nana Teiba Chinbuah made this observation at a dialogue on the role of women in the fight against corruption in Ghana at the La-palm Royal Beach Hotel in Accra.

She noted that corruption reduces resources for poverty reduction and deprives the poor and vulnerable of advancement opportunities.

Adding that women constitute the vast majority of people living in poverty, thus they are more affected by the vicious cycle that corruption creates for disadvantaged people.

She said the critical impact of corruption affects the quality and access to public services because funds are diverted from intended essential services such as healthcare, education, clean water, sanitation, and housing.

According to her, women constitute half of the world's population, yet they are mostly not engaged in discussions around one of the most pressing issues to development and social justice.

Nana Teiba Chinbuah, speech made known that progress towards the achievement of the Sustainable Development Goals would be undermined if corruption is not addressed.