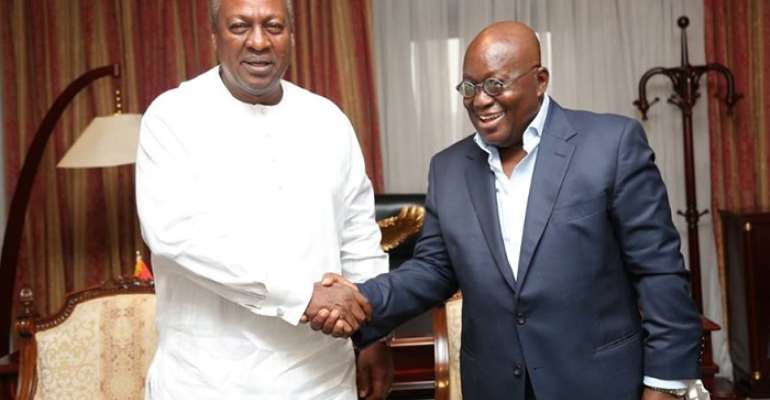 President Akufo-Addo and the New Patriotic Party seem to be living the feeling of ‘betrayal’ by former President John Mahama and his opposition National Democratic Congress (NDC) over the aborted December 17, 2019 referendum.

This is because the President who cancelled the referendum on Sunday, December 1, 2019, says there had been meetings between him and key stakeholders including former President Mahama and the leadership of Parliament which showed that there was a broad consensus on the matter of holding the referendum.

“It was in furtherance of this and other matters that, on Tuesday, 18th April, 2017, a little over four (4) months into my mandate, he held a meeting with his three predecessors, their Excellencies Jerry John Rawlings, John Agyekum Kufuor, and John Dramani Mahama, at Jubilee House, to seek their views and counsel on these issues”, the President said in his address to the nation.

“I came away from that mmeeting with the view that there was consensus amongst us that the time had come for political parties to participate openly in district assembly elections and local governance,” he said.

Regrettably, Mr. Akufo-Addo lamented that the main opposition party, the National Democratic Congress, made a U-turn, and stated that it was no longer prepared to go along with the national consensus.

“They indicated further that they will actively campaign for a 'No' vote. In as much as I still believe that there is enough support in the country for a 'Yes' vote to be successful on 17th December, I do not believe that this is the proper atmosphere in which an issue of such nature, i.e. the repeal of an entrenched provision of the Constitution, should be addressed in our country,” according to him.

President Akufo-Addo has, thus, instructed the Minister for Local Government and Rural Development, Hajia Alima Mahama, MP, who is spearheading the process, on behalf of government, to abort the process, and see to the withdrawal of the bills for the amendment of the Constitution, both in respect of article 243(1) and article 55(3).

The ruling New Patriotic Party (NPP) has expressed sadness over the cancellation of the proposed December 17, 2019 referendum, saying Mr. Mahama was only concerned about his political interest and not the interest of the nation.

The NPP in a statement signed by its General Secretary, John Boadu, said, it was saddened that the President “has been given no choice but to issue instructions for the withdrawal of the proposed amendments to Articles 243(1) and 55(3) of the 1992 Constitution, which would have seen the benefits of multiparty democracy extended to the local government level.”

It added that “we, are however, encouraged by the assurance last night that the President and his Government are not giving up in the important search for a consensus for as long as the NPP remains in office.”

It blamed the opposition NDC and its flagbearer, John Mahama for the cancellation of the referendum.

“The question that must be asked and answered by the good people of Ghana. That, between the two main leaders, Nana Akufo-Addo and John Mahama; between the two main political parties, NPP and NDC, which of them can you trust to have the interest of Ghana at heart? Who puts Ghana first? Who is prepared to let go the powers that the Constitution of the Republic grants to a President for the sake of improving how our country is governed? The answers are very clear to all.”

“For the NDC who say that introducing multiparty contests at the local government level would make governance at that level tainted by conflict, we say to them that they are not true democrats. They also do not have trust in themselves as a Party,” it stated.

PHOTOS: Ghanaians hit the streets of Accra for #FixTheCountr...
35 minutes ago