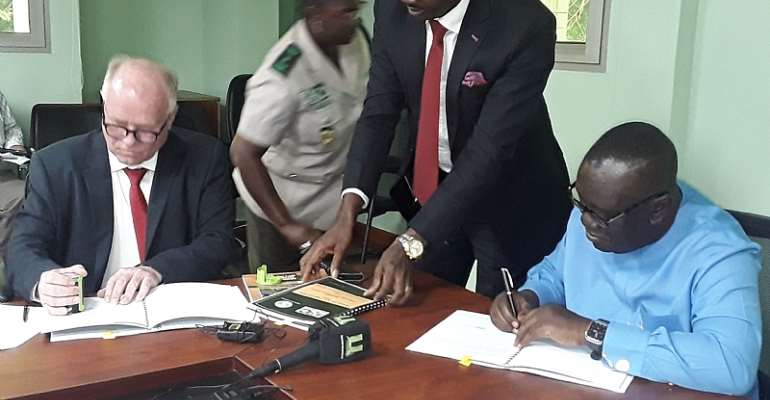 The Forestry Commission on behalf of Government of Ghana has signed a Memorandum of Understanding (MoU) with Swedish, Greenland Resources AB with the aim of formalising the country’s intentions of establishing large-scale forest plantations in the Savannah Region under a Public-Private Partnership.

According to the Chief Executive Officer (C.E.O) of the Commission, Kwadwo Owusu Afriyie, the plantation is expected to supply pulpwood for the production of paper as well as paper products in the country for both Local and International use.

Addressing the media at the signing ceremony, Mr. Afriyie said “Over the years, the Forestry Commission and Greenland have been working tirelessly on this project and after preliminary due diligence as well as pre-feasibility studies; recent field reconnaissance assessments have confirmed the viability of this undertaking.”

He added that since the next stage will cover 24 months, the MoU is to carry out detailed due diligence and financial analyses such as logging and harvesting including water transportation of pulpwood among others.

The C.E.O further noted that the project, when implemented, will radically transform the entire forestry sector and enable the sector contribute substantially to the GDP of the country.

He revealed that from the seventh year of the project implementation, the estimated 200000 of plantations which is expected to produce 6 million of pulpwood to feed the 1.5 million ton production facility annually in perpetuity since annual area harvested will be replanted.

The plantation project includes forest tree nurseries estimated at US$0.8 billion over the first rotation of seven years and another US$2 Billion for the construction likewise the establishment of a 1.5Million-Ton pulp and paper mill, he recalled.

He further added that this project will create an estimated 5000 full-time sustainable jobs for various categories of workers in the Savannah Region and 4000 full-time skilled and unskilled jobs covering various discipline.

He stressed that during the mill construction and set up phase,14000 jobs will be created with an additional 25000in the service sector during the erection phase.

He was confident that the entire project will generate over an estimated 50000 private sector jobs.

He challenged the youth to take up the opportunity to earn a living.

President of Greenland Resources AB, Torbjorn Johansson mentioned that the project will change Ghana completely not only as a pulp/paper producer but it will change the economy as well.

“This will be a foot print in West Africa. Once one factory is established, others will follow” he stated.

He mentioned, paper and pulp production is a project ongoing over the world adding that it is designed in ways which is good for the environment.

Mr. Johansson revealed that the pulp mill for the project will produce its own bio-fuel emphasizing that this project will boost Ghana’s income in the sector.

He said “In my country, we have 260000 jobs created through the pulp paper project and a huge part of GDP is generated from the forestry”

Mr. Johansson disclosed that the mill will be able to produce up to 150 megawatts continuously to the national grid, Bio-produced electrical power.

He added that since there is a bright future for pulp-paper production, the world must be able to produce 6million tons to meet demand.

The Forestry Commission says it will continue to lend its unflinching support to the project which will leave the future generation with a greener and more prosperous Ghana than it inherited.