Government gets Italy's backing on Ghana Beyond Aid agenda 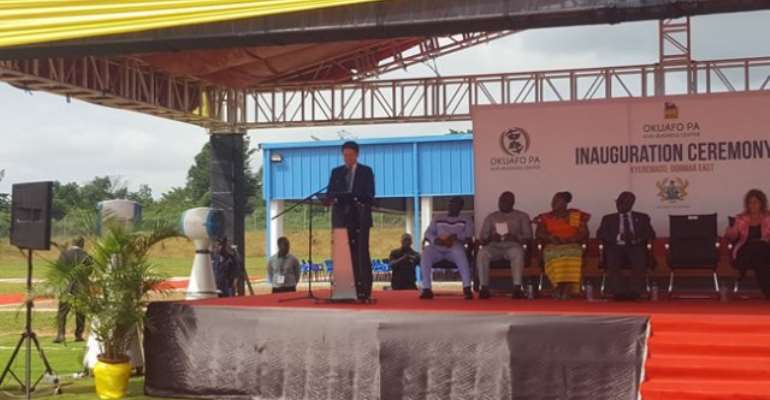 The Italian Prime Minister has lauded the “Ghana Beyond Aid” agenda and assured his country’s readiness to support the West African country achieve that vision.

Guiseppe Conte said Italy would provide the assistance for Ghana to implement her Planting for Food and Jobs (PFJs) and the One-District-One-Factory (1D1F) to achieve desirable results.

Mr. Conte said this when he inaugurated a multi-million dollar Agri-Business Centre at Kyeremasu in the Dormaa Central Municipality of the Bono Region.

The Centre called the "Okuafo Pa Project" was developed by ENI, an Italian Oil exploration and Production Company, following a Memorandum of Understanding between it (the Company) and the government of Ghana.

Earlier this year, the ENI signed an MoU with the Ministry of Food and Agriculture and the Ministry of Trade and Industry and performed a groundbreaking ceremony for the construction of the Centre, which was completed within six months.

The Kwame Nkrumah University of Science and Technology (KNUST) provides training activities at the Centre, which has classrooms, workshops, accommodation, for teachers and students an Administration and storages facilities.

Currently, it has 800 students.
He said the Centre had huge potentials to boost agriculture industry, and promote sustainable development in Ghana.

Mr Conte stressed Italy would strengthen and expand her bilateral relations and position Ghana to achieve her vision of development beyond aid.

The Senior Minister, Yaw Osafo-Maafo noted countries such as Malaysia, Singapore and South Korea, were progressing because they were processing raw materials, adding value to their agriculture produce and placing priority to skill development.

“Our government is re-focusing to change the grammarian concept of our education and place much attention on Vocational and Technical Education to create employable skills and turn the fortunes of the nation around,” he said.

He expressed appreciation to the Italian government for her continuous assistance to Ghana and hoped the relations between the two countries would be strengthened for mutual benefit.

The Chief Executive Officer of ENI, Claudio Descalzi said the project aims at training about 1,500 people annually and would be piloted in other parts of the country.

He said the ENI was determined to invest and transform the economy of Africa and implored the government to keep the project alive.

Earlier in a welcoming address, the Bono Regional Minister, Evelyn Ama Kumi-Richardson was thankful to ENI, Italian government and Ghana government for siting the project in the region.

She said it would help create jobs and stem irregular migration.