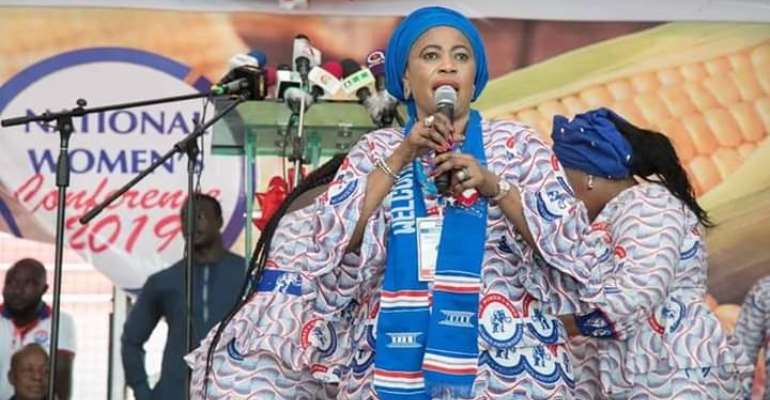 The conference was the first of its kind in the party’s history in Takoradi, the regional capital of the Western Region was on the theme, “WOMEN ON THE MOVE FOR VICTORY 2020”.

It was to climax the various Regional Women’s Conferences that the Wing held in all the 16 regions of the country.

The National Conference, which was attended by all the 275 and 16 regional women organizers of the party and their deputies as well as all female party executives at all levels, was meant to whip up the political enthusiasm of the women in the party and more importantly, to get them actively involved in party organization ahead of the 2020 electioneering period.

It was also to afford the party and the National Women’s Wing in particular, the opportunity to take stock of its activities over the years as the Special Organ of the party mandated to promote the party’s policies and programmes among women, raise public awareness on gender and children’s issues as well as to cultivate the support of women for the NPP before, during and after general elections.

The widely patronized conference, which set the entire twin city of Sekondi-Takoradi agog, was graced by all National Officers of the party and other party kingpins including female Members of Parliament on the ticket of the party, female Ministers of State and deputies, female MMDCEs, female CEOs and deputies, and other female Government Appointees as well as some of their male counterparts and all female Volunteer Groups in the party.

The First and Second Ladies of the Republic, Excellencies Rebecca Akufo-Addo and Hajia Samira Bawumia were the Special Guests of Honours respectively.

Speakers after speakers took turn to extol the achievements of the NPP government towards addressing the genuine concerns of women, and meeting the needs and aspirations of the country’s female populace.

On the basis of the NPP’s unbeaten track-record particularly in rolling out pro-women social intervention programmes and the amply demonstrated commitment of the Akufo-Addo government to doing even more, all the speakers at the conference including the party’s general secretary, John Boadu, called on Ghanaian electorates and women in particular to renew the mandate of the NPP in the next general elections since ONE GOOD TERM, DESERVES ANOTHER.

The chief scribe of the party also reiterated the commitment of the current leadership of the NPP to strengthening the party’s Special Organs as evidenced in the fact that the party, for the first time, is holding Regional and National Conferences of all the Special Organs of the party comprising the Nasara Wing which held its National Conference in Techiman, on November 22; the National Women Conference for the Women’s Wing; which shall be followed by the National Youth Conference for the Youth Wing, to be held in Tamale in December 7.

All these special conferences, according to John Boadu, shall be climaxed with a National Annual Delegates’ Conference to be held in Accra on December 21, 2019.

On her part, the National Women Organizer of the party, Madam Kate Gyamfua, expressed the unwavering commitment of her outfit, the National Women Wing, to galvanizing not only the women in the NPP but also the women of Ghana in general to vigorously campaign for and vote overwhelmingly for the governing party in the elections of 2020 and beyond.

The conference ended with a national rally on Saturday, November 30, at the Takoradi Jubilee Park

NPP must engage the grassroots if they want to win 2024 elec...
10 minutes ago