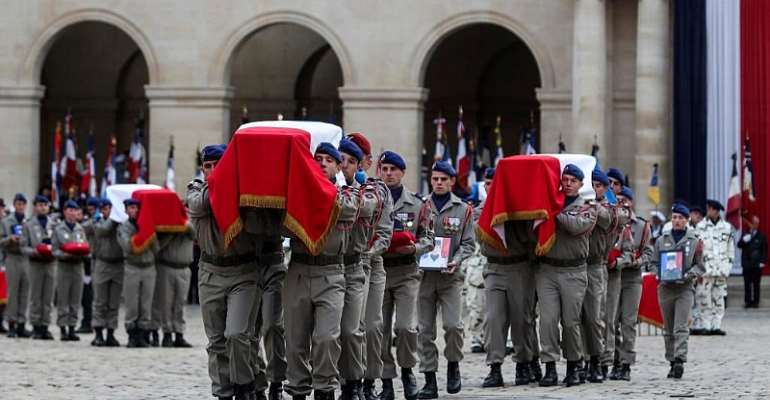 French President Emmanuel Macron honored 13 soldiers who were killed in Mali while on a mission. Some 2500 people gathered at courtyard of the Hotel National des Invalides in Paris to attend the commemoration ceremony. The soldiers died when two helicopters collided on November 25 while pursuing jihadists in northern Mali.

During his speech, President Emmanuel Macron said he "bowed to the sacrifice" of soldiers killed in Mali last week, "for France" and for "the people of the Sahel."

In a heavy atmosphere, the head of state honored "the fate of thirteen French", in presence of some 2,500 people, including the families of the victims, and politicians including former presidents François Hollande and Nicolas Sarkozy.

The thirteen coffins, each one covered with the tricolore, the French national flag, were carried by comrades of the killed soldiers and put down in the courtyard of the Invalides.

"I bow to their sacrifice, they died for us all," said Emmanuel Macron. "They died on a mission for France, for the protection of the people of the Sahel, for the safety of their compatriots and for the freedom of the world, for all of us who are there."

Operation Barkhane
It was the biggest single-day loss for the French military in nearly four decades and raised fresh questions about the effectiveness of France's 4,500-member Barkhane operation in Mali and four other countries in the Sahel.

Forty-one French soldiers have now died in the Sahel over the past six years.

The intervention began in 2013, when insurgents swept into Mali's north and rapidly advanced before being pushed back.

Thorough review
Earlier on, Macron said the government would begin a thorough review of Barkhane in the wake of the helicopter accident, vowing that "all options are on the table".

He also reiterated his call for EU allies to step up their participation in the West Africa operation after years of failing to secure significant support.

An Ifop poll for the Lettre de l'Expansion newsletter, published Monday, showed that 58 percent of respondents approve the Sahel operation, a level hardly changed from a previous poll in March 2013.

ASEPA to sue Presidency for more info on petition for CJ’s r...
53 minutes ago