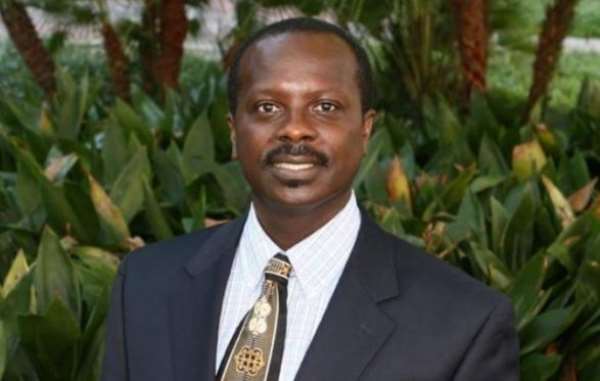 A US-based Ghanaian legal practitioner, Professor Kwaku Asare, popularly known as Kwaku Azar, is asking the Electoral Commission to go ahead with the December 17 referendum in spite of President Akufo-Addo's cancellation of the process.

He argues that the President cannot withdraw the Bill for the amendment of Article 55 (3) because the constitutional process is already in motion.

In an interview with Citi News, Prof Asare said the President's announcement has left Ghanaians in a state of confusion.

“The Electoral Commission understands its power and understands that it is independent and so they should go about exercising their power under the Constitution. And under the Constitution, the Electoral Commission has issued a constitutional instrument but two weeks ago they told us that they have already incurred significant cost putting together materials for the referendum and therefore it cannot even be postponed because they are going to incur all sort of loses if they try to postpone it so they should go ahead and schedule the referendum and not pay too much attention to what the President [of the Republic] is saying.”

President Nana Addo Dankwa Akufo-Addo in a brief address to the nation on Sunday, December 1, 2019, cancelled the December 17 national referendum which was meant to decide on an amendment of Article 55 (3) of the Constitution to enable political parties to sponsor candidates during local level elections.

The President also directed the Minister of Local Government and Rural Development, Hajia Alima Mahama, to withdraw from Parliament a Bill seeking to amend Article 243 (1) to enable Ghanaians to elect their Metropolitan, Municipal and District Chief Executives (MMDCEs).

The President attributed the decision to the absence of “a durable national consensus” on the matter following consultations.

“In these circumstances, I am convinced that it will not serve the public interest to go ahead with the holding of the public referendum on 17th December even though I believe a strong campaign for a YES vote would have succeeded. This is not the kind of atmosphere in which the repeal of an entrenched provision of the Constitution should take place.” Cancelling December 17 referendum unconstitutional – Ndebugri

Private legal practitioner and former Member of Parliament for the Zebilla Constituency, John Ndebugri, had accused President Nana Akufo-Addo of acting unconstitutionally when he cancelled the December 17 referendum.

“He did not quote any law that supports what he did. I was just saying that if he is about to revoke for example the appointment of a Metropolitan, Municipal or District Chief executive, he says that I am doing that under Article so so and so of the Constitution. If he is going to pass an Executive Instrument, he says I am issuing this Executive Instrument pursuant to article so so so so of the Constitution. Under which law did he do this thing? And I have said that the instrument concerning the referendum is no more within the authority of the Executive. It has left there. If you go to Article 290, it is very clear the Executive has finished its work. It gazetted this thing six months ago,” Ndebugri argued. Groups unhappy about cancellation of referendum

Civil Society Group, OneGhana Movement, in a statement, also expressed disappointment at the president for moving to withdraw the bill aimed at allowing Ghanaians to elect their own MMDCEs.

It thus called for the government to rescind the decision to withdraw the amendment Bill for Article 243 (1).

“We urge the President to demonstrate utmost good faith to citizens by laying the amendment Bill for Article 243(1) before Parliament, knowing fully well that MMDCEs can be elected without amending Article 55(3).”

In a separate statement, ChaLoG, also expressed disappointment and questioned if the Akufo-Addo administration was committed to pursuing the election of MMDCEs as it had promised in its 2016 election manifesto.

“This decision clearly vindicates ChaLoG's long held position that the government was all along not committed to the amendment of Article 243(1) but yet wanted the referendum to be held first on 17th December, 2019.”

“The decision taken by the government to withdraw the bill on the amendment of Article 243(1) is completely at variance with the NPP government's own 2016 manifesto document put together prior to the general elections,” ChaLog added in its statement.

The Minister of Local Government and Rural Development, Hajia Alima Mahama,  had already indicated   that processes for the amendment of Article 243 (1) were at a final stage awaiting a vote by Members of Parliament.

“Amendment to Article 243(1) has been prioritized.h The amendment Bill was the first to be processed. It is presently in Parliament and has gone through all the required processes. It is at the last stage which requires a vote by Members of Parliament (MPs) to approve the Bill. If we work hard it may be approved before 17th December 2019,” she said.

Though the National Democratic Congress (NDC) had started   advocating for a NO vote ,  it did not voice opposition to the election of MMDCEs.

The party was only worried that an amendment to Article 55 (3) will open district assemblies and unit committees to “the needless NDC-NPP polarisation.”

“…we have to repeal the part that says the President can appoint members of the District Assembly because if we say we are going to make them elected by political parties why will we go and vote as political parties and the President will still have the right to appoint 10 percent of the Assembly? So all those things should be repealed so we can see our way clearly. The government has promised to look at those things and repeal them so we are hoping that they will be able to do that.”

Observers have also stressed that the election of MMDCEs will be a massive step forward for Ghana's democracy.

The President of IMANI Africa, Franklin Cudjoe, said the possible election of MMDCEs  would have been President Akufo-Addo's best legacy .