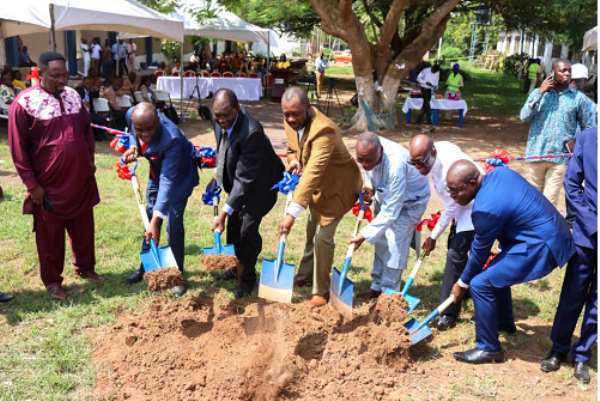 The University for Professional Studies (UPSA) has commenced the development of infrastructure projects on its campus in Accra.

UPSA is also constructing a GH¢90 million two 10 storey hostel blocks, to accommodate the increasing number of students at the tertiary institution.

The multi-purpose building and the hostels are expected to be completed within 30 and 15 months respectively.

Minister of Education, Dr. Matthew Opoku Prempeh, who performed the sod cutting ceremony for the commencement of work, commended the university for the initiative which he said was in line with government's education vision.

He said with the first batch of Free SHS students going to the university next year such infrastructure projects were in the right direction as it would increase university admission and expand the accommodation facility of the institution.

“Institutions like KNUST and UPSA are doing well when it comes to infrastructure what stops you from coming to ask how they are doing it,” he quizzed.

Dr Prempeh reiterated government’s stand on the Free SHS policy, saying it was the only way to ensure all Ghanaian children who are eligible, get SHS education.

The Vice Chancellor of the University, Professor Abednego Okoe Amartey, thanked the minister for the swift intervention towards the commencement of the project saying, “it took 48 hours for him to write a cover letter for us to take to the ministry of Finance.”

He also expressed his appreciation to Access Bank for supporting the project saying when completed the buildings would enhance academic activities of the institution which has over 15,000 students.

Member of Parliament (MP) for the Madina Constituency, Abu-Bakar Saddique Boniface, also presented 20 LED street lights to the UPSA in fulfillment of a pledge.