14 Get Bail Under Justice For All Prison Decongestion 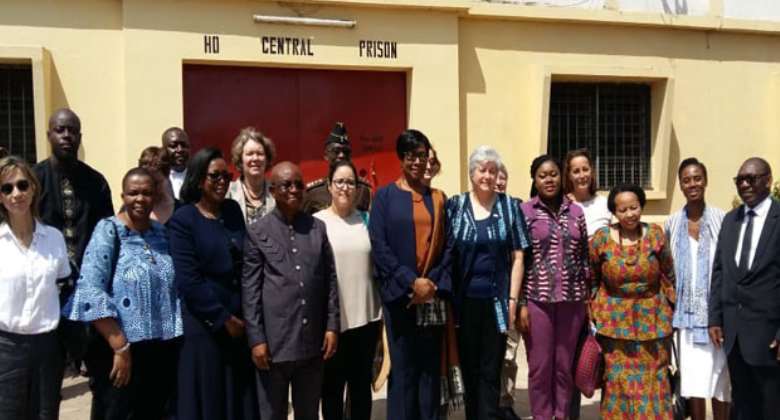 Chief Justice Sophia A.B. Akuffo and her entourage, including US Ambassador, at the Ho Central Prisons

Fourteen persons have been granted bail during in-prison court proceedings under the Justice For All Programme (JFAP) held at the Ho Central Prisons in the Volta Region.

The Justice for All Programme started in 2000, and it is aimed at easing prison overcrowding through setting up special court sittings to adjudicate cases of prisoners on remand.

The outgoing Chief Justice, Justice Sophia A.B. Akuffo, led a delegation of foreign diplomats, including the US Ambassador, to monitor the proceedings which were presided over by Court of Appeal Judge and Chairman of JFAP, Justice Clemence Honyenuga, and Justice Eric Baah, the Supervising High Court Judge for Ho.

The Ho Prisons which was built to accommodate 150 inmates now takes in 501 inmates, including 89 remand prisoners.

According to the Chief Justice, the Justice for All Programme was initiated by the then Attorney-General Joe Ghartey in collaboration with the Judicial Service of Ghana, the Ghana Police Service, the Ghana Prisons Service, lawyers, as well as civil society groups to check overcrowding in the prisons.

With support from the Danish International Development Agency (DANIDA) and POS Foundation, the Justice for All Programme has since inception helped reduce the remand inmate population from 4,285 in 2007 to 2,020 as at November 2019.

The Chief Justice assured the prisoners that the judiciary is committed in ensuring that their rights are not trampled upon.