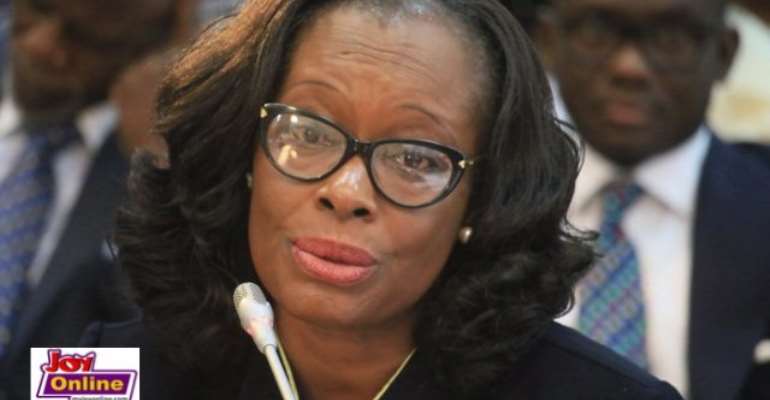 Gloria Akuffo is Attorney General and Minister of Justice

Pressure group, OccupyGhana, has threatened to bring an action at the apex court to correct an alleged constitutional inconsistency of a section of the Declaration of Assets and Disqualification Act.

The sentence in the act that OccupyGhana is challenging allegedly extends the time for public office holders to declare their assets and liabilities by six months. The group says this is wrong.

OccupyGhana, a group of eminent professionals in Ghana, wants the Attorney General, Gloria Akuffo, to agree that the six-month extension is not consistent with the Constitution and hence correct this by deleting that section of the Act.

When that provision, the last sentence in the Declaration of Assets and Disqualification Act is deleted, it will “bring the Act into conformity with the Constitution,” the group said in a letter to the Attorney General and copied to the Commission on Human Rights and Administrative Justice, the Chief of Staff and the Controller and Accountant General.

“However, if you disagree with us, then we would have no option than to bring an action in the Supreme Court under Article 2 of the Constitution for a declaration that that sentence is inconsistent with and in contravention of Article 286(1) of the Constitution,” OccupyGhana said in the letter to the Attorney General.

Read the full letter below .
Our Ref: OG/2019/010
1st December 2019
The Attorney-General & Minister of Justice
Attorney-General’s Department
Accra
Dear Madam:
RE: UNCONSTITUTIONALITY OF SIX-MONTH EXTENSION FOR DECLARATION OF ASSETS AND LIABILITIES, AND A REQUEST FOR REPEAL

We respectfully write to invite you to agree with us that the concluding sentence of section 1(4) of the Public Office Holders (Declaration of Assets and Disqualification) Act, 1998 (Act 550), which extends the time for public office holders to declare their assets and liabilities by six months, is unconstitutional. If you agree with us, then we respectfully would further invite you to take steps for the Act to be amended by deleting that sentence so as to bring the Act into conformity with the Constitution. However, if you disagree with us, then we would have no option than to bring an action in the Supreme Court under Article 2 of the Constitution for a declaration that that sentence is inconsistent with and in contravention of Article 286(1) of the Constitution.

Article 286(1) of the Constitution simply demands the mandatory written declaration by public office holders of their assets and liabilities as follows:

(a)â€‹ before taking office,
(b)â€‹ at the end of every fourth year, and
(c)â€‹ when the term of office ends.
The article provides specifically as follows:
“286.â€‹ Declaration of assets and liabilities

(1)â€‹ A person who holds a public office mentioned in clause (5) of this article SHALL submit to the Auditor-General a written declaration of all property or assets owned by, or liabilities owed by him whether directly or indirectly,

(a)â€‹ within three months after the coming into force of this Constitution or BEFORE taking office, as the case may be,

Thus, the declaration required under Article 286(1)(a) must occur in advance of, ahead of or prior to “taking office.” And the declarations required under Article 286(1)(b) and (c) must occur exactly on or by the expiry of every four years after taking office, and then exactly on or by the end of a term of office. The only instance that any public office holder was allowed to make the declaration “after” any of the events mentioned in Article 286(1), related to those who were in office when the Constitution came into force on 7th January 1993, and who therefore had until 6th April 1993 to make their declarations. And because that part of Article 286(1) had lapsed before Act 550 was passed in 1998, the Act does not even mention it.

We appreciate the underlying principle of this constitutional provision: declaring assets and liabilities BEFORE taking office, would mean that every appointing authority, i.e. the Executive, Parliament and Judiciary must insist on the declaration being made to the Auditor-General before any prospective appointee takes office. Indeed, it should be done in good time to allow the declaration to be verified and vetted by the Auditor-General who must then report any adverse findings to the relevant appointing authority before the person takes office. Each subsequent declaration must occur at the same time as or by the stated anniversary or end of office.

We respectfully draw your attention to Article 286(7), which also demands that “BEFORE entering upon the duties of office, a person appointed to an office to which the provisions of this article apply, SHALL take and subscribe” [emphases ours] the various relevant oaths. If, by the use of the word “BEFORE,” a person cannot be said to have assumed office until after taking the relevant oath, then by parity of reasoning within the same Article, a person can also not assume office until after they have declared their assets and liabilities to the Auditor-General. In other words, under the Constitution, a person is qualified to assume office only after (i) declaring assets and liabilities to the Auditor-General, and (ii) taking the relevant oath.

We have taken the trouble to set these arguments out at length because although section 1(4) of Act 550 reproduces Article 286(1) in substance, it adds words that effectively defer the making of the declaration for up to six months AFTER the events provided for. The subsection provides specifically as follows:

“In accordance with clause (1) of article 286 of the Constitution, the declaration shall be made by the public officer

AND SHALL BE SUBMITTED NOT LATER THAN SIX MONTHS OF THE OCCURRENCE OF ANY OF THE EVENTS SPECIFIED IN THIS SUBSECTION” [emphases ours.]

The inherent contradiction in the subsection is blindingly obvious. A thing that “SHALL” be done “BEFORE” or “AT” an event, according to the Constitution, cannot be done after the event on the authority of an Act of Parliament. That informs our view that the extension of time provided by section 1(4) of Act 550 violates the clear and express terms of the Constitution. Parliament had and has no power to postpone the declarations that the Constitution demands must happen “BEFORE” or “AT” an event, to any time “AFTER” the events. The words “BEFORE” and “AT” can never be interpreted or construed to mean “AFTER.” That six-month extension is definitely inconsistent with and in contravention of Article 286(1) of the Constitution.

It has become a notoriously unfortunate fact that Article 286(1) is known more for it being ignored and breached, than it being complied with. In our Press Release dated 16th October 2019 and titled “OccupyGhana Demands Assets and Liabilities Declaration by over 40,000 Affected Public Officers,” we stated that in our conservative estimation, there are about 40,000 public office holders who have never done the declarations that are mandatorily required by Article 286(1). And almost no one has faced any sanctions for refusing, failing or neglecting to comply.

We hold the view that the unconstitutional six-month extension is largely responsible for this continuing breach. In effect, by the time that unconstitutional extension of time is up, the person is entrenched in or has left the office, everyone has conveniently forgotten to declare or enforce the declaration, and then business continues as usual. That cannot and should not continue. Where the Constitution wanted to extend time for complying with its provisions, it did. Where the Constitution does not make any such extension, an Act of Parliament cannot.

We believe that by expressing your agreement with our position, we will all bring this matter to the forefront of national discussion. Better still, agreeing to work for the deletion of the offending sentence in section 1(4) of Act 550 will send the message to all who have not declared that no longer will this blatant breach of the Constitution be tolerated by the government and people of Ghana.

We would be grateful if you could respond to us within 14 days. If this timescale is not feasible, kindly let us know when you propose to provide a response.

OCCUPYING HEARTS AND MINDS FOR GOD AND COUNTRY
Story by Ghana | Myjoyonline.com