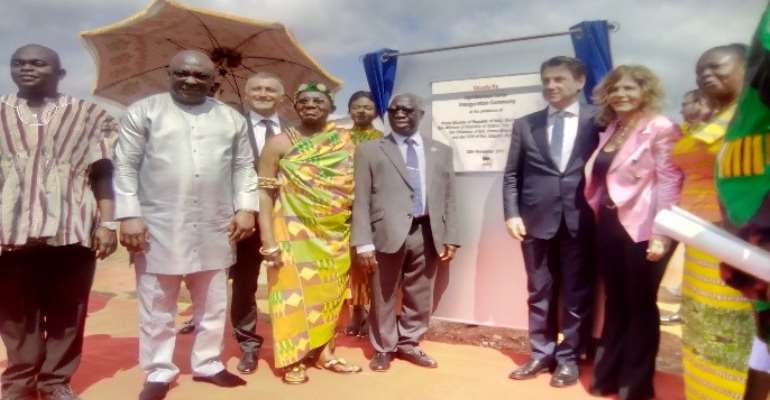 The Okuafo Pa Agri-business Center is an 800 capacity agricultural training center, newly established on a 40 hectare land with ultra-modern lecture halls, workshop centers, laboratories, farmlands as well as storage facilities and other utilities established by Eni, an Italian multinational oil and gas company in partnership with the Government of Ghana.

The facility which began operation in October this year, is first of its kind in Ghana and the Sub region and would be a focal means of ensuring a sustainable model to be replicated in the remaining regions of Ghana and other countries of Sub Saharan Africa, where ENI operates to ensure support for local industrialization through skills development and capacity building in a Public Private Partnership.

The yearly training, focuses mainly on agriculture activities such as greenhouse cultivation and poultry breeding, with specialties in processing and marketing. It is intended to also offer local farmers the opportunity to quality training which would add value to their produce and facilitate access to micro credit finance and labor market.

The initiative forms part of Eni’s broader vision, dubbed “Africa Project” aimed at supporting Ghana’s sustainable development through the promotion of socio-economic growth and aligned to the UN’s 2030 agenda for Sustenance and Development as well as Government of Ghana’s ‘Ghana beyond aid’ agenda.

Significant to the inaugural ceremony, was the signing of two memorandum of understanding. The first which was between ENI and Cassa Depositi e Prestuti (a financial institution in charge of international cooperation for development) would ensure the cooperation for identifying values in sustaining development projects in Africa and cooperate in terms of entrepreneur, agro industrial activities and access to micro credit, within the Okuafo Pa Project.

While the second, which is between Dormaa East Migrant Association and the Trainee Select Committee of Okuafo Pa has the objective to support the migrant association with capacity building and job placement. The agreement sees the selection of 50 trainees per year from the association in the Okuafo Pa programme.

The Chief Executive Officer of ENI, Claudio Descalzi explained that though the project has just begun with eight hundred 800 beneficiaries, their target is to train one hundred and fifty thousand 150,000 people in Ghana with the aim of investing in Africa for the good of Africa.

He added that though they have the passion and social responsibility to develop Africa through technical training and skills development, authorities as well as the people themselves need to show commitment and play responsible roles to ensure its success.

He also stated that Eni funded this initial project and his outfit is in a talk with the Italian government, the UN and other part of the World for funds, to ensure the sustenance of their vision.

Mr. Descalzi applauded government of Ghana for their quick response to the vision by way of providing all the needed prerequisite that aided the construction of the entire facility within six month.

The Italian Prime Minister, His Excellency Giuseppe Conte, said the project is extremely relevant and strategic for Ghanaian youth and it would encourage the youth to use their acquired skills in their own land to prosper its economy.

He was particularly happy that University of Milan and the Kwame Nkrumah University of Science and Technology KNUST were jointly handling the education aspect of the training.

He pointed that vocational training is the actual drivers for economic development of Africa and encourage Eni to continue in its good work while he assured the support of the Italian government.

The Senior Minister Hon Yaw Osafo Marfo who represented President Nana Addo Dankwa Akufo-Addo was very impressed with the facility and thanked Eni for the project more especially the credit facility which would assist trainees’ start-up businesses on their own, upon completion.

He thanked Nananom as well for making land available for the project.

He noted that the present government is shifting focus from the current Grammarian type of education to Technical Vocational Education Training (TVET) to equip upcoming youth with skills and knowledge which would transform Ghana’s raw materials into other finished product able to boost the economy.

To this effect, Mr Osafo Marfo said, there are ongoing development on 20 TVET Institutes to be equipped with modern equipment to support technical education throughout the country.

He added there is also a comprehensive skill gap analysis collaboration with the Ghana Industries to develop a curriculum and training for the country and the fact that all TVET institutions have been added to the free SHS.

He mentioned Planting and rearing for food and Jobs as some forms of modernization government has initiated in the Agriculture sector.