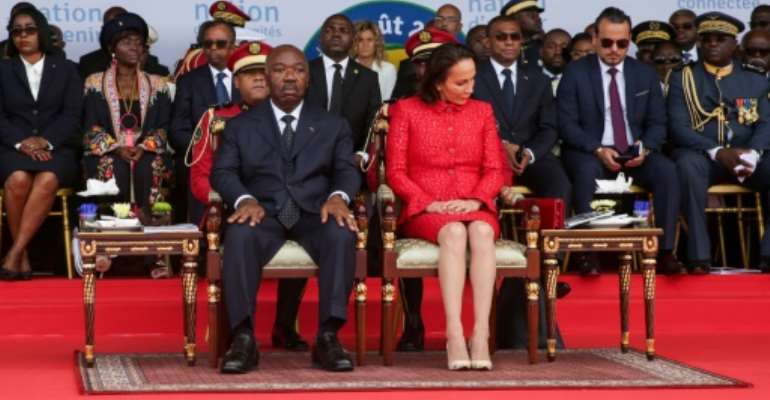 Gabon's President Ali Bongo and the First Lady attend a ceremony in August 2019. Bongo's then cabinet director Brice Laccruche Alihanga is second to the right behind the presidential couple. By Steve JORDAN (AFP/File)

The oil-rich central African state of Gabon has carried out a string of top-level arrests and reassignments as it ramps up a drive against corruption.

Nearly two dozen people, some of them in the inner circle of power, have been ousted from office, arrested or given other duties.

A leading figure is President Ali Bongo Ondimba's chief of staff, Brice Laccruche Alihanga, who has been dismissed from his job, although he retains the rank of minister.

Others are the former director of the National Fund for Health Insurance (CNAMGS), Renaud Allogho Akoue and the head of presidential communications, Ike Ngouoni, who was regarded as Laccruche's right-hand man. Both have been arrested.

Key changes have also been made in the intelligence and security forces, under decisions carried out by the president's office.

Laccruche adopted a low profile as government minister, though his influence steadily grew after Bongo suffered a stroke in October 2018.

The pro-government daily L'Union reported on Wednesday that more than 85 billion CFA francs ($142 million / 129 million euros), had disappeared from the funds of the Gabon Oil Company (GOC) over the past two years.

GOC is a state firm run by Patrichi Tanasa, who is close to Laccruche. Tanasa has been in custody since late November.

An investigation by L'Union also targetted the Dupont Consulting Company, whose executives included Laccruche's brother Gregory Laccruche, a businessman and mayor of Akanda, a coastal town northwest of Libreville.

Gregory Laccruche was detained on Wednesday, a source close to the presidency told AFP.

The public prosecutor said that suspects have been charged with embezzlement and money laundering.

Bongo's office said the inquiry has no political link.

"Whatever your position, if there are suspicions against you, you do not have impunity. Now it's up to the judiciary to do its work and to decide," said Jessye Ella Ekogha, who has replaced Ngouoni.

Current investigations are a follow-up to Operation Mamba, an anti-corruption campaign launched by Bongo in 2017, Ekogha said.

Bongo himself chaired an extraordinary council of the judiciary last Friday, a first in his 10 years in office, which began with an election in 2009 after the death of his father, Omar Bongo, ruler of Gabon for 41 years.

After the council session, Libreville's chief prosecutor Olivier N'Zahou lost his position in the capital to be appointed general attorney of Franceville, at the far end of the country.

"Mr N'Zahou is hiding because he is being followed and has the impression that someone wants to do away with him," said lawyer Anges Kevin Nzigou, who represents about a dozen suspects.

Earlier this year, Bongo appointed Lee White, a British-born green activist who has lived in Gabon for three decades and become a citizen, as new minister of water and forests.

His predecessor, Guy Bertrand Mapangou, was fired over a scandal involving illegal logging of kevazingo, a precious and protected wood, by a Chinese firm.

Running in parallel with this political upheaval is continuing speculation about Bongo's health.

Part of the Gabonese opposition continues to call for an expert assessment on his condition to see if he is fit to run the country.

Anti-LGBTQI+bill not to engender hatred for persons, meant t...
11 minutes ago

JB’s two phones tendered in as evidence
11 minutes ago