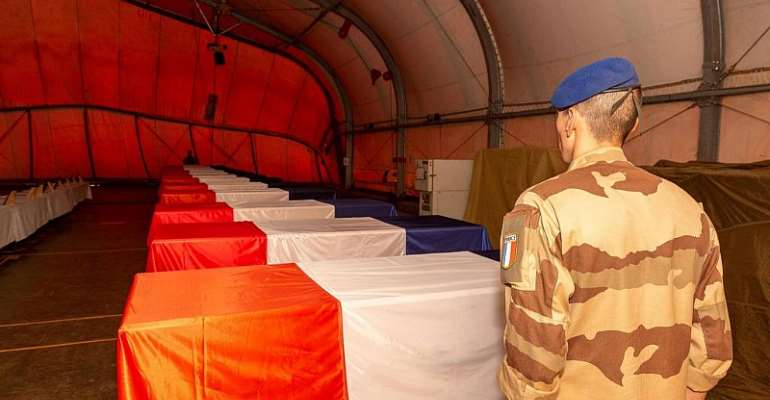 French President Emmanuel Macron will lead a national tribute Monday for 13 soldiers killed while battling jihadist insurgents in northern Mali. The ceremony will be held at the Invalides military hospital and museum in Paris.

French president, Emmanuel Macron, will bestow the Legion d'Honneur on the fallen soldiers

The 13 French soldiers died when two helicopters collided while chasing jihadists where militant violence has soared in recent months in northern Mali.

The coffins, draped in the red, white and blue of the French flag, were brought home from the French military base at Gao, near the restive border with Burkina Faso and Niger, on Saturday.

The crash was the biggest single-day loss for the French military in nearly four decades and raised fresh questions about the effectiveness of France's 4,500-member Barkhane operation in Mali and four other countries in the Sahel.

They are tasked with training local security forces to take on the jihadista, but so far these remain woefully unprepared despite years of pledges of more international funding and equipment.

41 French soldiers have now died in the Sahel in the past six years.

Macron said the government would begin a thorough review of Barkhane in the wake of the helicopter accident, vowing that "all options are on the table."

Macron also reiterated his call for European Union (EU) allies to step up their participation in the West Africa operation after years of failing to secure significant support -- only Britain has contributed helicopters and security personnel, while the US provides intelligence on jihadist movements across an area the size of Western Europe.

Cartoon controversy
So far, only the far-left France Unbowed party has openly called for the Barkhane troops to be brought home, but the deteriorating security situation in Mali has many officials questioning the force's role.

Controversy flared over the weekend after the satirical weekly Charlie Hebdo published a series of cartoons associating the 13 soldiers' deaths with the army's recent recruitment campaign.

The French army's chief of staff, General Thierry Burkhard, expressed his "indignation" at the cartoons.

In an open letter to Charlie Hebdo's editor, Laurent 'Riss' Sourisseau, he accused the magazine of having sullied the period of mourning for the bereaved families.

Sourisseau, however, defended  the magazines's "satirical spirit", while acknowledging the importance of the work of the French army and the soldiers' sacrifice.

But Sourisseau, who was wounded when jihadist attackers massacred 12 people in an attack at the magazine's offices in January 2015, declined Burkhard's invitation to attend the Invalides ceremony.

"We know that their mission is difficult and that they are dealing with merciless enemies," he wrote in a response to Burkhard, seen by French news agency AFP.

Mali on edge
Mali's President Ibrahim Boubacar Keita will also attend the ceremony, as he tries to defuse growing hostility at home to French and other foreign forces helping to fight Islamic militants.

France's intervention began in 2013, when insurgents swept into Mali's north and rapidly advanced before being pushed back.

He called on all political parties, including the main opposition group, to participate in a national debate starting 14 December on how to solve a security crisis that experts agree cannot be won solely with military means.