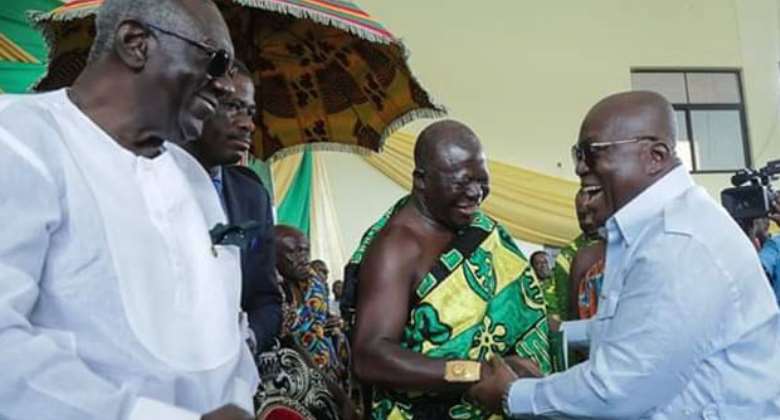 President Akufo-Addo says former President John Dramani Mahama seems not to have recovered from the shock that he suffered after losing the 2016 presidential elections.

He said public utterances by Mr. Mahama ‒ especially his insistence of reviewing the Free Senior High School (SHS) policy ‒ should he win the 2020 polls, shows clearly that he (Mahama) is living in a dreamland.

“Free SHS has come to stay and the people of Ghana will never allow the dreamlands who have still not awakened from the slumber of their defeat in 2016 to come and cancel it under the disguise of a so-called review,” the President added.

Although he did not specifically cite anybody's name, everybody knew he was referring to Mr. Mahama since he (Mahama) has consistently said he would review the Free SHS policy, should the NDC win the next election.

Speaking at Prempeh College's 70th anniversary speech and prize-giving day celebrations in Kumasi over the weekend, President Akufo-Addo said Ghanaians have seen the positive impact of the Free SHS programme on the lives of the youth, and so people have wholeheartedly embraced the social intervention policy.

Sounding confident, he said Ghanaians would renew the mandate of the New Patriotic Party (NPP) government in 2020, which he is leading in order to safeguard the Free SHS policy, so Mr. Mahama's reviewing comments would remain a dream.

The President strongly argued that the timing of the introduction of the Free SHS programme was right, pointing out that the alarming rate at which pupils were dropping out of secondary school posed a danger to the country.

“From 2013 to 2016, we had an unfortunate situation in Ghana where on the average, 100,000 children could not go to school every year due to poverty even though they were qualified to enrol in a school. Now a staggering 1.2 million students are in our various secondary schools due to the free SHS policy. This also means that about 400,000 more students have gotten the chance to enroll in a school during the last three years,” he highlighted.

Using the United States (US) as a case study, the President recounted how the US took a bold decision in the late 19th century to make public secondary school education free, a positive decision which has made the US a super-power now.

The President reminded the final year students of the various secondary schools who were the first batch to benefit from the Free SHS policy to learn hard and pass their examinations and shame the naysayers who oppose the Free SHS policy.

Continuing, the President assured that his administration would quickly resolve all problems that would hit the Free SHS policy on its way, adding that the government had already introduced several measures to help the policy to flourish.

Also, he said 1190 vehicles, comprising 350 buses and 840 pickups were being provided to the various secondary schools, adding that efforts were also being made to enable teachers to buy their own houses so they could retire in comfort.

Deserving students of Prempeh College who have excelled in the various subjects were awarded with certificates. These brilliant students also had the rare opportunity of shaking hands with the President and the Asantehene.