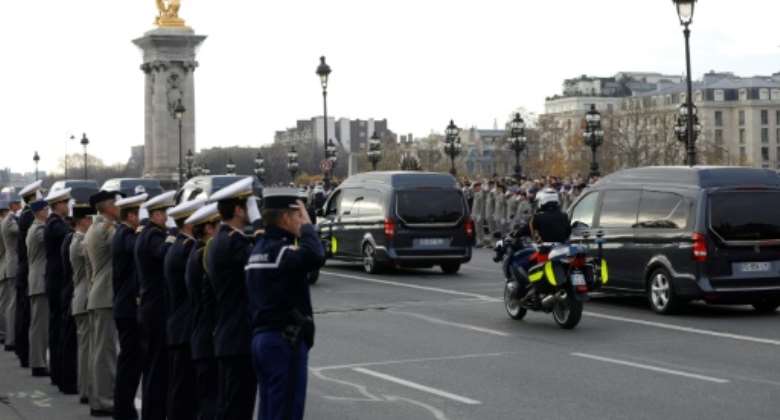 Soldiers saluted as the funeral convoy carrying 13 French soldiers killed in Mali crossed the Alexandre III bridge in Paris on Monday, ahead of a commemoration at the Invalides military hospital.. By GEOFFROY VAN DER HASSELT (AFP)

Hundreds of people lined avenues in Paris on Monday to honour 13 soldiers killed while battling jihadist insurgents in Mali, ahead of a national ceremony to mourn a disaster that has prompted soul-searching over the costs of the over five-year campaign in West Africa.

Sporadic applause punctuated sombre silence as a motorcade bearing the coffins crossed the Alexandre III bridge toward the Invalides military hospital and museum.

The soldiers died when two helicopters collided last Monday while pursuing jihadists in northern Mali where militant violence has soared in recent months.

It was the biggest single-day loss for the French military in nearly four decades and raised fresh questions about the effectiveness of France's 4,500-member Barkhane operation in Mali and four other countries in the Sahel.

Margot Louvet, 23, came from Gap in southwest France to watch the procession, wearing a T-shirt with the official portrait of one of the soldiers killed, her friend Antoine Serre, 22.

"He was a pearl, the kindest and most generous," she told AFP. "Being here is a way to mourn him, and realise that he won't be coming back."

President Emmanuel Macron will lead the commemoration, which begins at 3:00 pm (1400 GMT) and bestow the Legion d'Honneur on the fallen soldiers.

Some 2,500 people are expected to attend, and the ceremony will also be broadcast on a giant screen set up outside the Invalides.

Forty-one French soldiers have now died in the Sahel over the past six years.

France's intervention began in 2013, when insurgents swept into Mali's north and rapidly advanced before being pushed back. But despite France's presence the jihadists have regrouped to carry out deadly attacks and violence has spread to neighbouring countries.

Macron said the government would begin a thorough review of Barkhane in the wake of the helicopter accident, vowing that "all options are on the table".

He also reiterated his call for EU allies to step up their participation in the West Africa operation after years of failing to secure significant support.

The bodies of the soldiers killed in the crash have been flown back to France for burial. By Thomas PAUDELEUX (ECPAD/AFP)

An Ifop poll for the Lettre de l'Expansion newsletter, published Monday, showed that 58 percent of respondents approve the Sahel operation, a level hardly changed from a previous poll in March 2013.

But controversy flared over the weekend after the satirical weekly Charlie Hebdo published a series of cartoons online associating the 13 soldiers' deaths with the army's recent recruitment campaign.

The French army's chief of staff, General Thierry Burkhard, expressed his "indignation" at the cartoons.

In an open letter to Charlie Hebdo's editor, Laurent "Riss" Sourisseau, he accused the magazine of having sullied the period of mourning for the bereaved families.

Sourisseau defended on Sunday the magazine's "satirical spirit", while acknowledging the importance of the work of the French army and the soldiers' sacrifice.

But Sourisseau, who was wounded when jihadist attackers massacred 12 people in an attack at the magazine's offices in January 2015, declined Burkhard's invitation to attend the Invalides ceremony.

"We know that their mission is difficult and that they are dealing with merciless enemies," he wrote in a response to Burkhard, seen by AFP.

Mali's President Ibrahim Boubacar Keita will also attend the ceremony, as he tries to defuse growing hostility at home to French and other foreign forces helping to fight Islamic militants.

He called on all political parties, including the main opposition group, to participate in a national debate starting December 14 on how to solve a security crisis that experts agree cannot be won solely by military means.