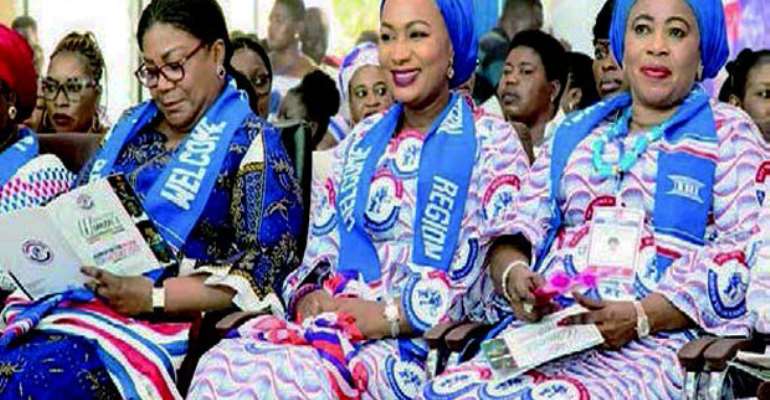 The Second Lady, Samira Bawumia, says despite inheriting an economy in distress, the New Patriotic Party (NPP) administration has worked hard to turn things around, and Ghana is ready for economic take-off.

She said it would be good for Ghanaians to give President Akufo-Addo four more years to build on the solid foundation and initiate more socio-economic interventions to better the lives of everyone.

Addressing a mammoth rally on Saturday organised by the women’s wing of the NPP as part of their three-day maiden National Women Conference held in the Sekondi-Takoradi Metropolis, Samira Bawumia explained that the Akufo-Addo-led administration has built a solid economic foundation “and is fixing the collapsed economy the John Mahama-led NDC government left. Ghanaians should therefore give President Akufo-Addo four more years to build on the solid foundation.”

She called on Ghanaians not to make a mistake and vote for the NDC in 2020 because an NDC government would destroy the solid foundation laid by the current NPP government.

“If you acquire a building which has a weak foundation and you want to renovate it, the prudent thing to do is to make sure the foundation is solid before you build on it. That is exactly what Nana Addo is doing,” she said.

According to Samira Bawumia, the President has demonstrated that he is committed to fulfilling the promises he made to the people before assuming office and needs to be given four more years to execute laudable policies to better the lives of Ghanaians.

“Government is delivering on the promises it made to the people of Ghana and addressing their plights. But our opponents sit on radio and television and say they have not seen anything. Why? Can’t they see that the Free SHS programme has taken effect, the planting for food and jobs, the one district one factory, one village, one dam are all ongoing. What about Nation Builders Corps (NABCO), the reduction in electricity tariffs and port duties. These and many more are the reasons the electorate should renew the mandate of the current government in 2020l,” she mentioned.

The National Chairman of the NPP, Freddie W. Blay, pointed out that the enthusiasm with which the NPP women attended the conference is a manifestation that they are ready to help the party retain power in 2020.

“Surely, we will definitely win in 2020 but the victory will not come easy so we expect our hardworking women to use your persuasion skills to explain the good works of the party to people and to win them for NPP,” he said.

He called on the NPP not to succumb to the propaganda and lies of the NDC that Ghanaians were not seeing anything being done by the government, saying, “We are fixing the economy and very soon all Ghanaians will feel the impact of the NPP’s hard work.”

The National Women Organiser of the NPP, Kate Gyamfua, was grateful to President Akufo-Addo for appointing more women to sensitive positions in the government.

She admonished the NPP women to play their respective roles effectively to ensure the party stays in power for long.

There were numerous speakers at the rally and each cautioned against complacency within the rank and file of the NPP as election 2020 draws closer.