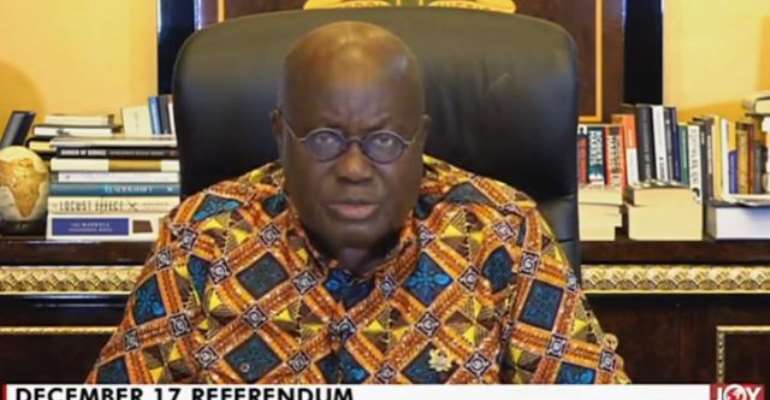 Discontent and anger has greeted President Akufo-Addo’s decision to withdraw the amendment of Article 243/1 from Parliament.

The amendment, had it been completed, would allow Ghanaians to elect their own Metropolitan, Municipal, Municipal and District Chief Executives (MMDCEs).

However, in a live Television address to the nation, President Akufo-Addo announced a withdrawal of the bill together with another amendment that could have introduced partisan politics at the Assemblies had it been approved in a referendum.

The President cited lack of consensus for the Referendum question, on the political party participation in local government, for the withdrawals.

How are the two amendments related?

Article 243/1 empowers the President to appoint the MMDCEs. Its amendment is supposed to take place in Parliament by two-thirds members of the House as it is not an entrenched clause.

As the MMDCEs fall under the Assemblies, their election would be non-partisan due to the barrier Article 55/3 places on political party participation at that level.

To make the election of MMDCEs partisan, the government then proceeded to ask Ghanaians to vote in a referendum to repeal Article 55/3.

But the opposition NDC who had earlier cooperated with the government, declared it would not support the introduction of partisan politics to the Assemblies.

National Chairman of the party, Samuel Ofosu Ampofo said at a press conference in Accra that the party would actively campaign for ‘NO’ in the referendum.

Heeding the calls, President Akufo-Addo withdrew the referendum bill but also withdrew the bill on election of MMDCDEs, sparking anger on social media.

“Looks suspiciously like petulance by government.”If you won't vote yes then we won't vote for MMDCEs at all" a Twitter user wrote

Why are they withdrawing the voting of MMDCES? They are a bunch of hypocrites and we the citizens must come together and fight this kind of lies and deceit,” Austine, another user wrote.