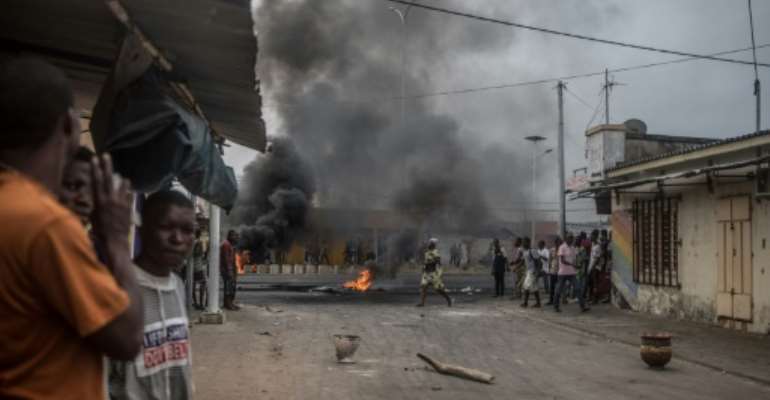 Protests erupted in Benin after parliamentary elections were held in April without a single opposition candidate taking part. By Yanick Folly (AFP)

The government of Benin on Wednesday accused EU Ambassador Oliver Netten of involvement in "subversive" activities after ordering him to leave the West African country by December 1.

Bilateral cooperation has been "disturbed by the activities of this diplomat who has got involved in activities that we may consider subversive," government spokesman Alain Orounla told a media briefing.

"An ambassador's functions presuppose an obligation of courtesy towards the authorities of the host country," Orounla said. "Respect for this obligation should be mutual."

A senior Beninese diplomat had said earlier on condition of anonymity that Netten "has interfered too much in domestic affairs."

The German envoy "constantly calls on civil society to protest against the government," the diplomat said.

The source said Benin's foreign minister had repeatedly warned the envoy over his "excesses."

A spokeswoman for the EU in Brussels confirmed the order to leave by Sunday and said the bloc had been informed of the decision by the Benin authorities on November 20.

"For the EU, nothing can justify such a measure in the generally good relations that have existed up until now between the EU and Benin," the spokeswoman said.

"We have demanded as a matter of urgency from our partners in Benin some clarification on the specific reasons for their decision, but we have not received them yet."

The former French colony has typically been seen as among West Africa's most stable democracies.

But it has been facing a political crisis since controversial parliamentary elections in April sparked mass protests.

President Patrice Talon, a former business magnate who came to power in 2016, has been accused of carrying out a concerted crackdown on his opponents that has driven key rivals into exile.

Parties allied to Talon won all the seats at the disputed polls after opposition groups were effectively banned from standing.

Talon, who made his fortune in cotton, hosted a political "dialogue" last month to try to calm the tensions but several main opposition groups were not invited to the event.

The country subsequently tweaked its constitution and electoral law but the opposition complained that the changes fell well short of their expectations.

The EU, a major financial donor to Benin, has given hundreds of millions of euros (dollars) to help develop good governance, agriculture and access to electricity.

The decision to expel the ambassador comes as the country faces economic pain after its giant eastern neighbour Nigeria halted imports and exports across their shared border in a bid to halt smuggling.

NDC Will Reintroduce Automatic Promotion Of Teachers – Maham...
11 minutes ago