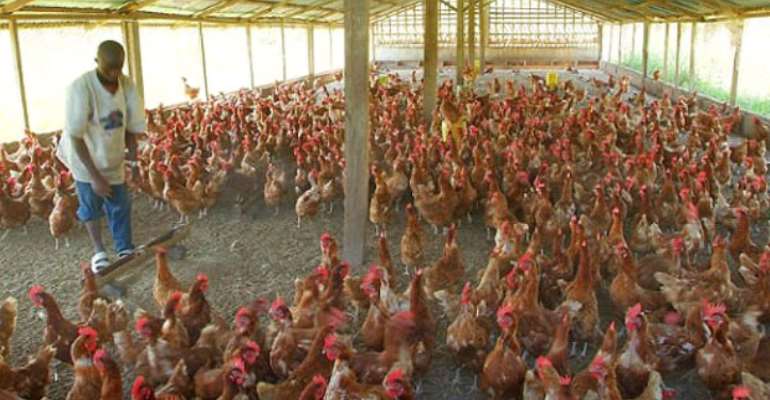 There are only a few Ghanaians who do not patronize chicken, a fact which underscores the large volume of consumption of this major source of protein.

The economic implication of the import of most of the poultry consumed locally is telling and, therefore, demands an immediate rethink.

The local poultry industry is one which with the necessary patronage from Ghanaians can be a major source of addressing the unemployment challenge in the country.

Imagine the patronage that locally produced maize would get from poultry farmers who would depend on it to feed their birds alongside the fish components which our fishermen would catch. In fact, the trickle effect of a mass patronage of locally produced poultry industry would be enormous; it will go a long way in addressing our seemingly intractable unemployment problem and provide another chapter in the fight against poverty.

Last week, poultry farmers in the Greater Accra Region sent an SOS to their compatriots to patronize their products as opposed to the imported ones.

The call was also directed to the government to take another look at the import of the product from countries where because of subsidies for agricultural produce and the generally lower cost of production make them cheaper than ours.

Such a decision would have been taken long ago even before the incumbent administration assumed the reins of power, had it been easy. The advantages of promoting locally produced poultry outweigh the import option. Only such a ban or the imposition of a deterring duty element would compel consumers from its patronage.

The Nigerian government is currently battling smugglers of rice into the country as a means of offering the necessary fillip to local farmers of the staple and to save the country's foreign exchange for other essential imports.

Some decisions must be taken when they impact positively on the economy as in the case of poultry imports.

We should not lose sight of the age of imported poultry products, some of which we have learnt are as long as four years from the date of slaughter and dressing to their arrival on the tables of Ghanaians here at home.

The health implications of such imported poultry products cannot be vouched for. There is no way that such products can surpass our locally produced ones in terms of quality and even taste.

The ban on imported poultry products should be complemented with massive education in the media to trigger a taste and patronage change among Ghanaians.

When there is sufficient education about the health benefits in patronizing locally produced poultry and the fact that doing so produce jobs for our compatriots and save our foreign exchange for critical imports for medicine and even infrastructural development, changes in taste and patronage can be achieved.