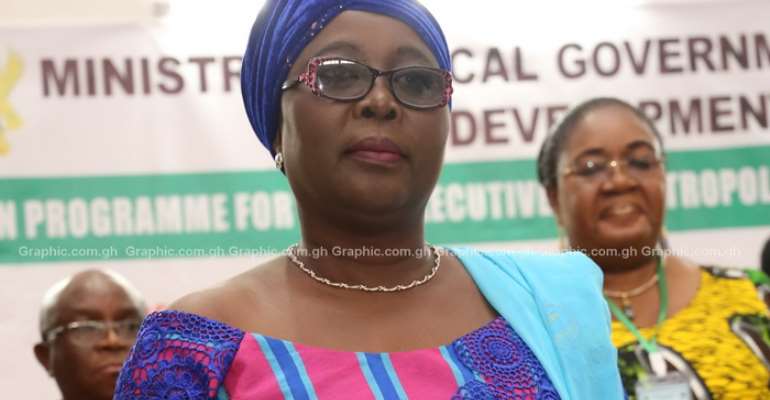 The factors shaping the pre-referendum discussion among the political parties and civil society organisations have trickled down to the wider populace, with a number of people expressing diverse opinions on the exercise, which seeks to amend Clause 3 of Article 55 of the 1992 Constitution to allow political parties to sponsor candidates for election to district assemblies and the unit committees, or retain it.

Although some of the people the Daily Graphic interacted with showed interest in the exercise, others demonstrated ignorance, apathy and mistrust, with others describing it as needless.

While a number of people who spoke to the Daily Graphic in Accra and Tamale said they had heard about the referendum but did not know about the details, others said they were hearing about it for the first time and were not concerned.

On the other hand, others were explicit that they would not partake in the exercise because it would not change anything in the country.

There were also others who saw the exercise as important but believed information on it was scanty and, therefore, called for intensive sensitisation to get majority of Ghanaians to get involved.

The mixed sentiments were the same in views sought in the Upper East Regional capital, Bolgatanga, and in Kumasi in the Ashanti Region.

Exercise necessary
From Accra, Juliet Akyaa Safo reports that a man at the Kwame Nkrumah Interchange trading area who gave his name only as Barima said he would vote on December 17.

His said his vote would be ‘yes’ because the election of assembly members on party lines would pave the way for the President to give power to the people to select their metropolitan, municipal and district chief executives (MMDCEs).

Another trader, Michael Annoh, indicated that the referendum was important because it would help democracy to work better in Ghana.

The Vice-Chairman of the Obra Spot Branch of the Ghana Private Road Transport Union (GPRTU), Mr Ebenezer Arhin, said he had heard of the referendum but most of the young men in the area had little knowledge about it.

He called on the Electoral Commission (EC) to reschedule the exercise to allow for more education, since it was clear that education on it had not gone down to the people to encourage a large turnout.

A communications specialist, Mr Bruce Bullu Liman, said he had full knowledge of the referendum.

“We will be voting to accept or reject the participation of political parties at the local government level. I will go and cast my vote when the day comes,” he stated.

An agriculturist, Mr Ibrahim Alhassan, said the referendum was about approval to amend Article 55 Clause 3, so that multi-party democracy would be introduced at the local government level.

“This will pave the way for political parties to participate in district level elections and for the public to elect their MMDCEs,” he said.

He said the current low level of development, inefficiencies and structural deficiencies at the local government level had informed his choice of a ‘Yes’ vote.

He said the introduction of partisan elections at that level would whip up the interest of the public to turn out in their numbers to vote and also get more qualified and competent persons to serve.

Another person, Ms Habiba Iddrisu, said her understanding of the issue was whether local level elections should be made partisan or non-partisan.

‘No’ to referendum
Those who described the referendum as needless argued that it would bring nothing good to the nation.

Some of them said they did not understand the whole exercise and they would, therefore, not mind if it was cancelled.

An entrepreneur, Mr Korku Anselm Zormelo, said the referendum was about the election of MMDCEs.

“Let’s not be deceived please. Article 243 is already in Parliament and, according to our Constitution, Parliament has the right to amend the Constitution, so we vote for our MMDCEs, rather than they being appointed by the President,” he said.

A self-employed, Mr Lampard Boye, said his understanding of the referendum was that a group of people who described themselves as the political elite wanted a way to further plunder the nation’s resources.

With that knowledge, he said, he would vote ‘No’.

A catering officer, Mr Alhassan Fuseini, said: “We don't need political parties’ participation in our assembly and unit committee elections, as this will further worsen and deepen the mistrust in the political environment in Ghana.”

Northern Region
From Tamale, Samuel Duodu reports that while some residents were against the move to allow political parties to take part in local level elections, others said they saw nothing wrong with it and so they would vote ‘Yes’ in the referendum to make local level elections partisan.

But others called for the withdrawal of the referendum, since they saw it as a total waste of time and resources.

A national service person, Mr Zakaria Abdul Mumin, said he would vote ‘No’, explaining that when political parties were allowed to take part in local level elections, it would deny well-meaning Ghanaians who were capable but not aligned to any political party from taking part in decision-making at the local level.

Although he said he would vote ‘No’ if the referendum came off, he also called for the total withdrawal of the referendum, since it was a waste of time and resources.

“I will advocate a big ‘No’ vote on the day of the referendum because it will lead to majority and minority decisions in the assembly sittings where decisions will be taken from political parties’ point of view, instead of the opinions of the individual assembly members,” Mr Zion Abdul Rauf said.

Another resident of Tamale, Ms Diana Ngon, said voting to elect MMDCEs was not a big deal; the real worry was the participation of political parties in local governance.

Ashanti Region
Kwadwo Baffoe Donkor reports from Kumasi that with less than a month to the referendum, there is still confusion in the minds of some residents of Kumasi on what exactly the referendum is about.

While some think it is about amending the law for them to elect their own MMDCEs, others say it is to introduce partisan politics in district level elections.

A resident of Kumasi, Maame Ama, said she was aware of the referendum on December 17 but not really sure what the issue at stake was all about “because I have heard the President saying the referendum is to elect MMDCEs, while others are also saying it is to allow parties to be involved in the election of assembly members”.

“Be that as it may, I would like the status quo to remain. I don’t want partisan politics at the local government level,” she said.

A student, Ms Modester Tawiah, said she had no idea at all about the referendum but had seen posters of aspiring assembly members all over the place but she was not interested in the election.

For the journalist and aspiring assembly member for the Asafo Electoral Area, Mr Ernest Okai, “it is a ‘No’ vote for me”.

According to him, introducing partisan politics in district level elections would make it difficult for some of them to offer their services, as they would not want to be associated with any political party.

Another student, Mr Kwaku Ntiamoah, told the Daily Graphic that even though he was a registered member of the New Patriotic Party (NPP), “I would not want political parties to be allowed to sponsor candidates for district level elections”.

The Assembly Member for Soe-Yipaala in the Bolgatanga municipality, Mr Augustine Abanbire, suggested that the exercise should be postponed in order to intensify education on it to enable people to understand the issues.

He said, for instance, that the people should understand why they should vote “YES" or “NO" in the referendum, as well as know the differences between articles 55(3) and 243(1) of the 1992 Constitution.

The Assembly Member for Dorongo in the Bolgatanga municipality, Mr Maxwell Adongo, for his part, said people should be encouraged to vote “YES" in the referendum.

A government appointee in the Gwenia Nura Electoral Area of the Kassena Nankana West District, Ms Faustina Agetera, entreated policy makers and other stakeholders to go back to the drawing board and work on the Affirmative Action Bill for it to become law before talking about the referendum to amend Article 55(3) and Parliament to amend Article 243(1) of the 1992 Constitution.