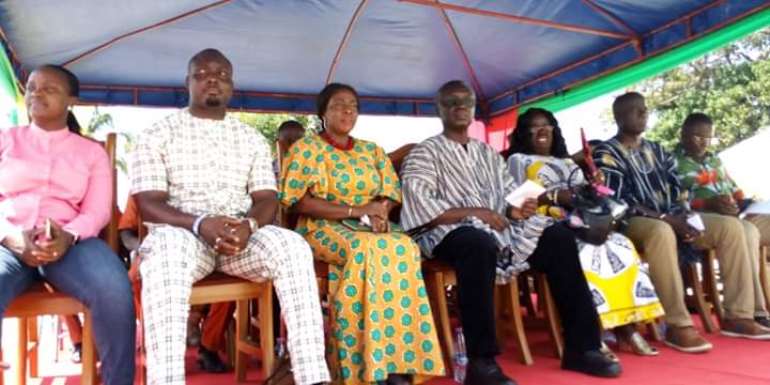 The Minister for Environment, Science, Technology and Innovation (MESTI), Professor Kwabena Frimpong-Boateng on behalf of President Akufo-Addo has inaugurated a Community Mining Programme in Nzema East Municipality of Western Region.

The Programme is aimed at formalizing mining in selected communities across the region and ultimately in the country.

At least one community mine expected to be set up in each of the mining Districts in the country.

It is expected that the community mines, when executed judiciously, would provide employment for more than 4,500 miners that hitherto were engaged in illegal mining activities in the country.

This is the second time the Akufo-Addo-led government has opened a Community Mining in the Western Region.

It would be recalled that President Akufo-Addo on Wednesday, July 24, 2019, inaugurated the first Community Mining at Wassa Akropong in the Amenfi East District.

In the case of Nzema East, this viable economic programme would take place in five communities in the municipality.

Speaking at the colourful inaugural ceremony held at Axim Ceremonial Ground, Prof. Frimpong-Boateng explained the significance of the programme to the gathering.

He said the programme was for the communities and the proceeds would be used to develop the mining areas and the Municipality.

He said the Municipal Chief Executive, Member of Parliament for the area and the Chiefs of the mining Communities were the leaders of the Programme. "They will make sure that the beneficiary Communities mine well"

"... President Akufo-Addo said let us domestic mining, by bringing in Communities, so that it will belong to them (Ghanaians ) so that they can use the income (money) to develop their communities and also create employment for the youth".

He said the Programme was going to facelift the Nzemaland in three or five years to come and therefore urged the youth not to use the money delivered from the programme to marry more than two wives but marry one so that income would stay in Nzemaland.

"I know from three to five years going, Nzemaland will change, and the youth will get work to do, and I will urge the youth not to marry more than two or three wives, but marry one wife so that the money will stay here", he stated.

He cautioned "And to those who will be in charge of the Programme, they should make sure that they include more Chiefs and let the Chiefs feel that the lands belong to them. President Akufo-Addo will not be happy if the Chiefs are not involved".

He assured that "We will mine here and refine the gold here so that the money will be here".

He was optimistic that a time would come some communities would not rely on Central Government for social amenities such as toilet facilities. "On the course of the mining, we will come here to educate the residents about how they will preserve the land so that we will prevent death and also people will not be affected by bad chemicals".

He, therefore, seized the opportunity to call on the gathering to support President Akufo-Addo and the MP for the area, Catherine Afeku by voting massively for them in 2020 to continue their good works.

On her part, the Member of Parliament for Evalue-Ajomoro Gwira Constituency, Mrs. Catherine Afeku, said the Gwira area where the Community Mining Programme would take place deserves it.

She said the area has been blessed with gold and thanked the Akufo-Addo-led government for fulfilling its pledge to make the area developed.

"There is more gold on the land of Gwira area and we thank the Akufo-Addo-led government for opening a Community Mining in Gwira", she said.

She said the Programme would reduce unemployment situation in the area and urged her Constituents to support the Programme.

"This year's Christmas will be well celebrated in Gwira as a result of the Community Mining Programme", she emphasized.

She, therefore took advantage of the excited atmosphere to call for unity among the people as an avenue to accelerate development in the Constituency.

"I use this platform to urge all Chiefs in this Constituency to come together to fight for development, divided we fall, united we stand for development", she concluded.

He assured Government of their total commitment to rally behind the programme to succeed.

He therefore appealed to government to expedite action in the construction of deplorable Gwira roads which have been halted after sod cutting in July, 2019.

On his part, the Municipal Chief Executive (MCE) for the area, Hon. Frank Okpenyen applauded President Akufo-Addo for initiating the mining Programme.

He disclosed that the Municipality has already registered over 2,000 Community Miners adding that registration was still ongoing.

"We have registered over 2,000 Community Miners and registration is still ongoing if anybody is willing and able to take part, the person is welcomed."

He promised to work with the Chiefs to make sure the programme last longer to benefit the Municipality. "I am hopeful and God willing a year by this time, we will vote massively for President Akufo-Addo and the MP Catherine Afeku to thank them for developing the Nzema East Municipality".

He said apart from the Community Mining President Akufo-Addo has brought to his area, a number of development projects have been chalked.